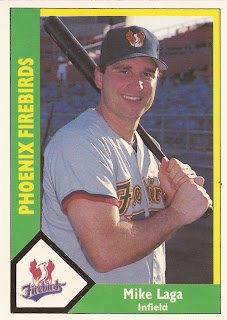 "Balls fly out of this park pretty good," Laga told The Associated Press after that September 1982 game. "The first one, though, is the one you dream about. Hopefully there are many more to come."

For Laga, there were just 15 more. But he hit those in a major league career that spanned nearly a decade, with Laga playing with the Tigers, Cardinals and Giants.

Laga, though, never got into more than 41 major league games in a single season. Toward the end of his career, Laga also played two seasons in Japan, hitting 32 home runs there.

Laga's career began in 1980, taken in the first round of the January draft by the Tigers, out of Fairleigh Dickinson University.

He earned his first call-up that year in 1982, after a season where he hit 34 home runs at AAA Evansville, with an average of .250.

With the Tigers in 1982, Laga got into 27 games, hitting a total of three home runs and batting .261. Over the next three seasons, Laga returned to the majors each year, but got into no more than 12 games each year.

By 1986, though, after a spring where Laga hit six home runs, he stayed with the big club for the start of the year. The Associated Press noted his success at AAA - more than 100 home runs in four years, but also 449 strikeouts in that time.

"It's a funny business, baseball," Laga told The AP. "I've done everything I can do to make this team. It's a little frustrating, but I hate to complain."

Laga stuck with the Tigers through mid-May, getting into 15 games. He hit three home runs, but had an average of just .200. By September, Laga was a Cardinal, sent there to complete a four-player deal from August.

With the Cardinals in September, Laga got into 18 more games, hitting .217 with three home runs. Laga also, according to legend, hit one out of the old Busch Stadium on Sept. 15, hitting it foul but out.

"My role," Laga told The AP after one game, "pure and simple, is to pinch hit and drive in runs."

For his final two seasons, Laga moved to Japan, playing with the Fukuoka Daiei Hawks. More recently, Laga has continued his involvement in baseball, in youth baseball. Laga serves as honorary chairman of Mike Laga Youth Baseball in Northampton, Mass.