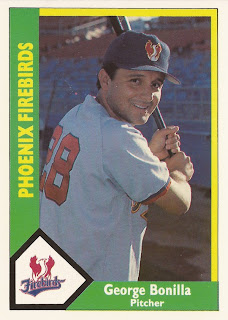 His 10 wins for the team in 1985 still rank tied for fourth best in school history. His 89 strikeouts rank tied for seventh. His 18 starts and 8 complete games both rank second.

For his career, which lasted just two seasons at Santa Barbara after coming out of junior college, Bonilla's 18 wins is still tied for 10th.

Bonilla took that career with Santa Barbara to the Giants, signing as a 14th round draft pick that year in 1985. Bonilla, though, couldn't take it to the majors. In a professional career that spanned six seasons, he made it to AAA, but no higher.

Bonilla spent his first year as a pro with the Giants at short-season Everett, going 4-6, with a 4.12 ERA. In an August game, Bonilla left in the seventh with a lead, but got a no-decision.

He moved to single-A Clinton in 1986, switching to generally relief. In 39 outings, he posted a 2.45 ERA, the first of four Bonilla seasons with a sub-3 ERA.