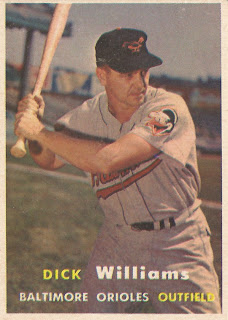 One of the coolest sequences I've run into in my two years doing this blog centers around Rick Lancellotti.

I interviewed him almost a year ago, in February. He was a great interview, lots of great stories. One of his bigger stories centered around his manager in 1982 with San Diego, Dick Williams, on Lancellotti's first trip to the majors.

I won't go into the story in detail (You can read it again here) but, quickly, the story centered around the old school manager Williams coming down hard on Lancellotti for being late to a medical session, no matter the cause, the day after Lancellotti made a game-saving catch.

Williams never started Lancellotti again. It was a great story by itself, one that was a big part of Lancellotti's career, but a tiny part of Williams' Hall of Fame career.

The timing of the Lancellotti interview, though, couldn't have been more perfect. That June, Lancellotti happened to get an invitation to take part in the Hall of Fame Classic in Cooperstown. The manager was the very same Dick Williams.

That back story was something I never would have known without this blog. And that was the very last opportunity for anyone to know it. (The Lancellotti Postscript) Less than two weeks later, Williams was gone. 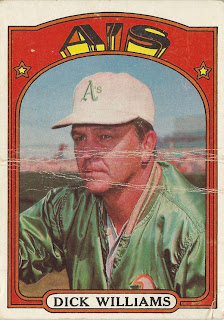 I bring this up because I picked up a couple of Williams' older cards in my Christmas Haul. I picked up his 1957 Topps offering, with him as a player for the Orioles. I also picked up his 1972 Topps card, with Williams in his new role as manager of the Oakland A's.

Williams' 1957 card back notes that the previous season marked his first time as a regular in the majors. He'd previously been a part-time big leaguer. He was also among the top American League "flychasers" on the year.

Then there's the 1972 Dick Williams. That came with the big crease through the middle. Williams was coming off a year in 1971 where he won AL Manager of the Year honors, Topps notes. He would go on to win another honor in 1972, a World Series title. 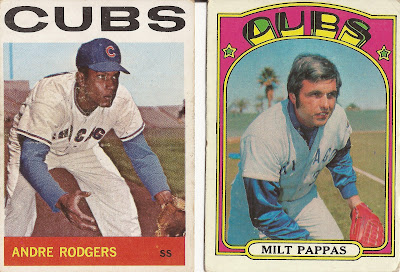 I'm putting these two cards together, not only because they are from the same team, but also because they have the same stance. I actually picked out the Milt Pappas card because 1972 was the year that Pappas threw his no-hitter, the one that was also a near-perfect game.

Pappas' card back also includes the tidbit that the Reds traded for Pappas, asking who they traded in exchange. The answer is Frank Robinson. The trade, though, wasn't straight-up as the card implies. The Orioles also sent two other, though lesser-known, players for the future Hall of Famer Robinson.

Andre Rodgers was in the middle of an 11-season major league career in 1964. He was also coming off the season in which he would get the most playing time. He got into 150 games with the Cubs in 1963, but hit only .229. 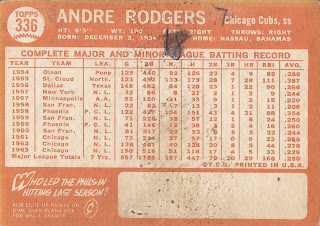 Rodgers' card back includes a couple items worth note. For some reason, the magic coin question relates to the Phillies. Who lead the team in hitting. Thanks to Baseball-Reference, I don't have to take a coin to the card. The answer is center fielder Tony Gonzalez.

The other interesting thing wasn't originally on the card. It's those two penned-in numbers: 18 and 7. Curious, I checked Baseball-Reference again for the Rodgers' uniform number in 1963 and 1964. Rodgers' number was, indeed, 18.

While it isn't clear exactly what significance the 7 had for whoever wrote on the card back, Rodgers did eventually wear No. 7. In 1967, he played his final 47 games in the majors with the Pirates. In that time, he's listed as wearing No. 7.
Posted by Steve78 at 3:00 PM