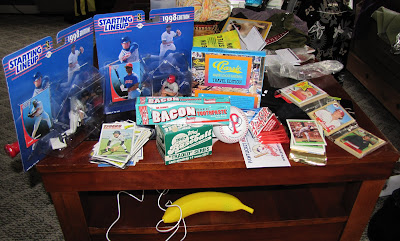 My haul for First Christmas 2012

I think it's safe to say that I am the only person in the United States this past week who received a Juan Gonzalez Starting Lineup and was happy to receive it.

I actually received both a Juan Gonzalez and a Frank Thomas Starting Lineup, both, of course, were members of the CMC set.

The Starting Lineups were part of my larger haul from what my wife and I billed as First Christmas 2012. For the background on that, read back a few posts. With that, we decided to wait until New Year's to open our presents.

It was worth the wait, mainly because I recently discovered a cool local card shop and spent an afternoon going through the place for my Christmas list. That's where I found the Starting Lineups, both in the dollar bin. 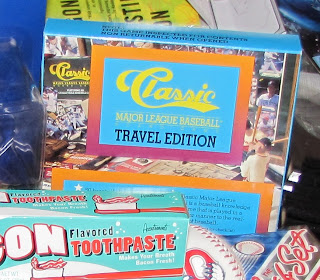 I also found the cool Classic travel edition game from 1990, also in the dollar bin. (I guess I'm cheap to buy for) That'll be fun to go through at some point here.

Also at the shop, I went through stacks and stacks of cards, finding some cool cards of CMC set members. And some packs, on my list were packs of 1992 Donruss The Rookies and 1990 Leaf. Both were there. 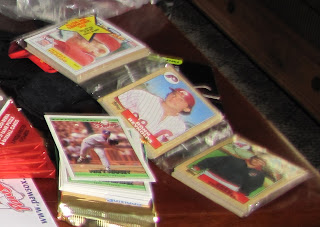 There was a 1987 Topps rack pack there, too. I had my wife get me a box three years ago now. This one was significant because one of the cards showing was a card I could never seem to pull from a pack as a kid, and also couldn't pull from that box. It's the Rafael Palmeiro Future Stars card. 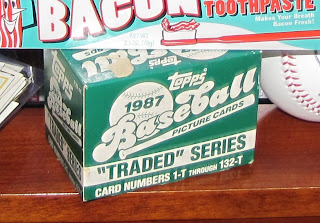 Speaking of 1987 Topps, there's the 1987 Topps Traded set. That's cool because, while I was very familiar with the base set as a kid, I never actually had the traded set. So the cards are all new to me, except the Andre Dawson, his first appearance as a Cub. I definately had that as a kid.

And speaking of Dawson, my lovely wife went off the list and spotted an old Dawson Expos pin in the store, one that I missed. Picked that up, as well. I love her.

The last baseball thing for First Christmas: One of our roadtrips for 2012. That road trip is to Pawtucket. I gave my wife a list of holiday packages and she selected that one. Came with a baseball and a mini bat.

So that's my cool haul for First Christmas 2012. And, for eagle-eyed readers, I did also get a banana phone extension for my iPhone and bacon toothpaste. I asked for the first one. The second one was just a bonus.
Posted by Steve78 at 12:00 PM