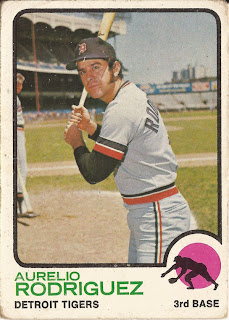 One of the coolest thing about doing this blog learning about some of these players that I never paid any attention to before.

Going through the card shop stacks at that cool local shop last month, picking out my Christmas presents, I was constantly amazed by the names that instantly caught my notice, because they were names from this blog.

With some other cards that I've stored away, waiting for the opportunity to post them, I think I'll go through, as time permits, in groups from one player or two.

Aurelio Rodriguez is one of those former players that I never really heard of before doing this blog. I featured him here back in March 2011. He earned a card in the CMC set as a coach for the Toledo Mud Hens in 1990. 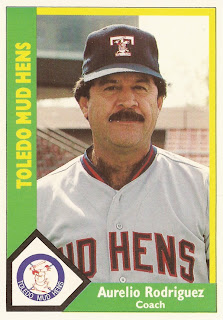 Rodriguez ended up playing in 17 big league seasons. He also went on to a coaching career, one that was cut short in 2000 with Rodriguez' death as the result of a car-pedestrian accident.

I've picked up at least four Rodriguez cards, three of them in this haul. One of them was that 1973 Topps Rodriguez above. The 1973 photo, of course, was taken at Yankee Stadium. There's also a guy in the on-deck circle behind Rodriguez who snuck into the photo.

The card back provides Rodriguez' stats back to 1965, when Rodriguez played in his native Mexicoe with Fresnillo and Jalisco. He then made the majors in 1967, with the Angels. Topps also notes a three-run Rodriguez home run that sent the Tigers to victory Oct. 1, 1972, helping the Tigers to the AL East crown. 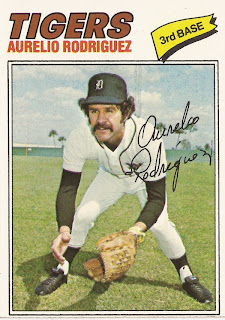 Rodriguez was still with the Tigers by 1977, actually staying with them through 1979. Rodriguez played in 128 games for the Tigers in 1976, with a .240 average and eight home runs.

Topps, though, felt it had to reach back to 1975 to find a Rodriguez highlight, noting that Rodriguez hit a "Grand Slammer" July 19, 1975. 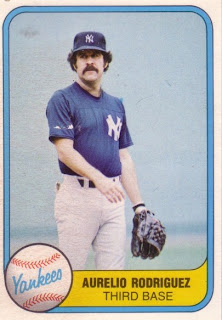 By 1980, Rodriguez was with the Yankees, getting on this 1981 Fleer card. This card actually came in a pack of 1981 Fleer I picked up in Cooperstown in 2010. I include it here because I can. Rodriguez' career was winding down by the time his 1982 Topps card came out. He'd played in just 27 games with the Yankees in 1981. But he returned for 118 games in 1982 with the White Sox, before his final year in 1983 with the White Sox and the Orioles.

Email ThisBlogThis!Share to TwitterShare to FacebookShare to Pinterest
Labels: Search