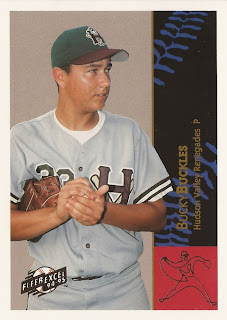 His second outing, though, was enough for the win. He went the final three innings, giving up just one single in the Sooners win, The Daily Gazette wrote.

"The other night, things just weren't going good," Buckles told The Daily Gazette. "But tonight, I felt comfortable all the time."

Buckles was taken that same month in the seventh round of the draft by the Rangers. But, in a career that spanned eight seasons, he would never make the majors.

I mention Buckles here because, before yesterday, I had never heard of him. But I go from that, to picking up two cards of his on the same day. I showed one of them Saturday, his 1995 Topps Prospects card I got in a pack I picked up at my local card shop.

The other Buckles card I got was in a large stash of 94-95 Fleer Excel minor league cards. The stash, which the cool shop guy let me have for next to nothing, was well cared for. The cards were in order, with a few cards missing, 24 by my count. 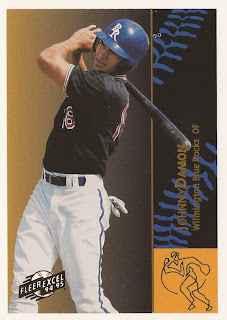 I suspected some of the key cards were missing. Thumbing through the stash, that was mostly true, though some key cards remained. Johnny Damon was there.

After checking Ebay, some of the missing cards were identified, Derek Jeter, Mariano Rivera, Andy Pettitte and Nomar Garciaparra. 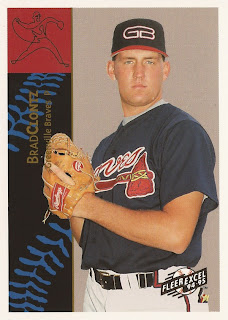 I'm not sure what I'll do with these cards. Maybe they'll be incorporated into a future version of this blog. The CMC set should be finishing up this October. I was thinking of going with the 1991 Classic set, though, if I'm inclined to continue.

But it would be nice to complete this set. From this stash comes an actual want list. It's 24 cards long.

This is another set that I remember from when I was younger. I actually got nine of the cards autographed back in the day. So that's cool. 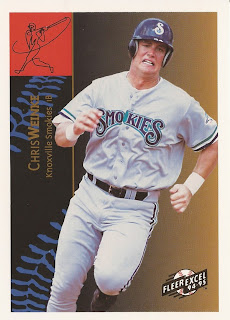 Here's another card from the stash. It's Chris Weinke, player on the Knoxville Smokies. Weinke, of course, would go on to win the Heisman Trophy as quarterback of Florida State five years later in 2000.

There appears to be little, if any, overlap with the CMC set from five years earlier. But Weinke has some connection to the set, to Toledo trainer Steve McInerney.

Weinke played at AAA Syracuse in 1995, where McInerney was also trainer. I interviewed McInerney in November at his office and McInerney still has a photo of himself with Weinke in his office.

By the way, watch for my latest interview Monday, with former minor leaguer Tony Blasucci.