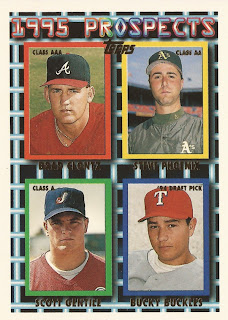 Scott Gentile told The Hartford Courant in 1992 that his invitation to the U.S. Olympic baseball trials that year was honor.

He'd made the cut to 40, from an original group of 90. Coming from Western Connecticut State, he also ended up being the only player from a Division III school to make that next group vying for an Olympic spot.

"It's uncommon for a Division III guy, especially one from New England where the season is so short, to be regarded so highly," Olympic team pitching coach Brad Kelley told The Courant. "Forget all those Division I, III labels. Scott is not a common pitcher. He's one of those special ones, who has a chance to go all the way to Barcelona."

Three years later, as a member of the Expos system, Gentile was honored as the single-A prospect on a 1995 Topps Prospects card. Neither honor, though, went further. Gentile never made the Olympics. He also never made the majors.

Gentile's 1995 Prospects card came in a pack of 1995 Topps that I picked up today at my local card shop. Gentile was one of two prospects on the card never to make the majors. Bucky Buckles, a 7th round pick from 1994, never made it higher than AA.

Elsewhere in the pack were three CMC set members and an interesting fact that I hope is still accurate regarding players who go by their initials. I hope it's still accurate because I'm not going to go check to see if it is. 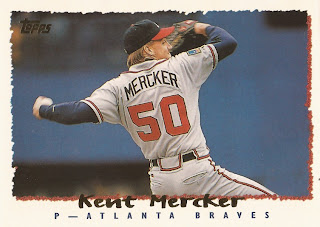 Kent Mercker's card was there, with the pitcher in mid-throw. The back includes a completely inaccurate prediction from Mercker before an April 1994 game. Mercker apparently told his catcher Javy Lopez before that April 8 game that he was going to throw a perfect game. 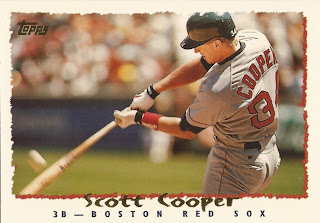 Scott Cooper is in mid-swing on his card. His card back also focuses on his 1994 April. That month, Cooper hit seven home runs. He previously hit only 14 in 295 major league games, Topps notes. Cooper has yet to be featured here. 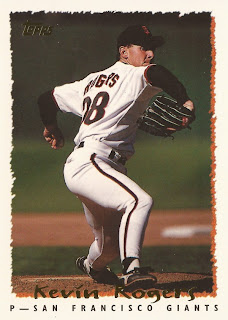 By the time Kevin Rogers' 1995 Topps came out, his major league career was already over. That was because of a blood clot in his shoulder. Topps notes that he lost much of 1994 to the clot. Once he was well, Rogers tried a comeback, but he never got back to the majors. (His August 2011 G21D feature) 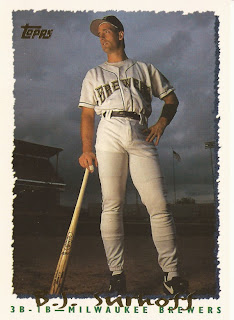 Finally, that piece of Topps trivia. According to Topps, in 1994, B.J. Surhoff had amassed enough major league games played to have played the most for a player whose first name consists of initials.

The player he surpassed? J.C. Martin.

I was kidding. I just checked it. Yes, it's still a record.