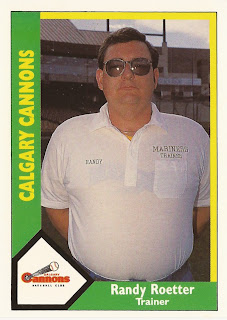 Water will help with rehydration of athletes, but sports drinks can provide more of what the dehydrated players need, including electrolytes and carbohydrates, trainer Randy Roetter wrote in the Professional Baseball Athletic Trainers Society Spring 2008 newsletter.

"The flavor will encourage the athlete to drink while the electrolytes, especially sodium, replaces what the athlete lost in sweat," Roetter wrote in the PBATS publication. "The carbohydrates provide energy for the athletes’ working muscles."

Roetter wrote the article on preventing heat illness as a trainer for the Mariners' team in the Arizona League.

He also wrote the article having more than a quarter century working as an athletic trainer. He also wrote it having written the book on being a trainer in the minor leagues, or at least a book.

A native of Ohio, Roetter's athletic training career began in the early 1980s. In 1981, he was listed as a trainer for Youngstown University. He started with the Mariners system in 1988, at Wausau. He then served 1990 with the AAA Calgary Cannons.

It was in 1997 that Roetter wrote the book on athletic training, a 43-page publication titled simply "Guidelines for Being a Minor League Baseball Trainer."

The book covers the range of jobs that a minor league trainer does, including traveling secretary, clubhouse manager, equipment manager and, finally, athletic training, according to the PRC Publishing book synopsis.

"These duties are often not covered or taught in a classroom setting," the Roetter book synopsis reads, "but are learned in the field through what we know as 'on the job training.' In this book, Randy Roetter covers all these mentioned aspects and more."