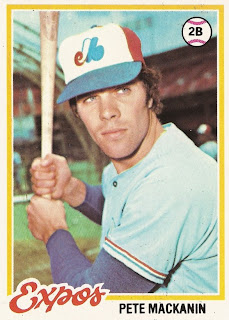 Pete Mackanin came up in the bottom of the 11th of that July 1975 game, the winning run on second.

"In my first couple of years in professional ball," Mackanin told The Associated Press afterward, "I used to worry when I came up in situations like that. I didn't have the confidence. Now I don't worry."

Mackanin was in his third season with time in the majors, his first there full time. He went on to play in nine big league seasons through 1981. He didn't stop playing until 1984.

Mackanin has since gone on to a long post-playing career as a manager in the minors, and manager and coach in the majors, serving 2011 as bench coach for the Phillies.

Mackanin's playing career began in 1969, taken by the Senators in the fourth round of the draft out of Brother Rice Catholic High in Chicago.

He played that first season at rookie Wytheville, moving to single-A Burlington in 1970. He hit AA Pittsfield and AAA Denver in 1972. In 1973, Mackanin hit Texas.

With the Rangers that year, Mackanin got into 44 games. In 90 at bats, Mackanin got just nine hits. He returned for just two games in 1974, getting one hit in six at bats. He spent the rest of 1974 at AAA Spokane. 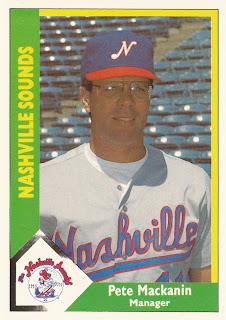 At Spokane that year, Mackanin hit .291, with 28 home runs. In April, Mackanin hit a walk-off single for a Spokane win. "I'm just glad I had the chance to win the game," Mackanin told The Spokane Daily Chronicle after that game.

Mackanin arrived with the Expos in an off-season trade. That next season, he got into 130 games for Montreal, the most he would see in a season in his career. He ended up hitting .225, with 11 home runs.

He returned for another 114 games with Montreal in 1976, hitting .224 with eight home runs. One of those home runs came in June against the Dodgers, plating the game-winning runs. It was the second-straight game in which Mackanin hit the game-winner.

In 1977, Mackanin got into 55 games with Montreal. Moving to Philadelphia in 1978, Mackanin's big league time dropped to five games that year and 13 the next.

On Sept. 30, 1981, Mackanin hit a two-run home run in the bottom of the second. The home run proved to be the last hit at Minnesota's Metropolitan Stadium. It also proved to be Mackanin's last in the majors.

Mackanin marveled to The AP about the place that home run had in Twins history. "I might be a trivia question 10 years from now."

Ten years from that point, Mackanin was well into his coaching and managerial career. He played the next three seasons, but all in the minors, ending his playing career with the Cubs in 1984, at AAA Iowa.

By 1985, his managerial career was underway.