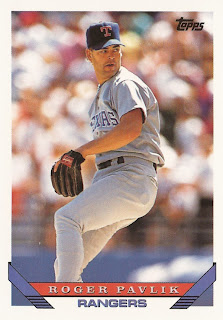 The Rangers had a rough couple of weeks in June 1993. But, Ranger manager Kevin Kennedy saw a bright spot in starter Roger Pavlik.

In this June 13 game, Pavlik went eight innings, giving up four hits and no runs.

"He's had two good outings on this homestand and that really picked us up," Kennedy told The Associated Press after that outing. "He's got four quality pitches and he's learning to make adjustments."

Pavlik's 1993 Topps card was included in a pack I picked up this past summer in Cooperstown, among the ones that have been sitting by my desk waiting to be opened since then.

Pavlik made the majors in 1992, in his seventh season as a pro. He was taken by the Ramgers in the second round of the 1986 draft. In the minors in 1990, Pavlik played that year for high-A Charlotte and AA Tulsa. Pavlik, though, didn't make the main CMC set.

But there were four CMC set members elsewhere in the pack, Mark Whiten, Travis Fryman, Kent Mercker and Doug Linton. All four have been featured here. 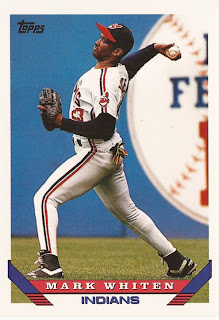 Mark Whiten was in his fourth of 11 big league seasons in 1993. He appeared in the CMC set as a member of the Blue Jays organization, at AAA Syracuse. He was featured here in May 2010.

On the Topps card back, Topps goes back to 1987, when Whiten was in the South Atlantic League. That year, he was named the outfielder with the best throwing arm.

Also, note the large baseball on the outfield wall on Whiten's card. It's obviously not difficult to figure out that marks the retired number 19, for Indians- and American-legend Bob Feller. 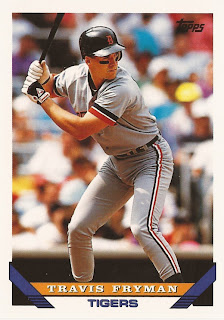 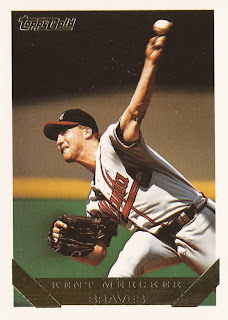 The cool thing about this pack, the one Gold card in the pack was a CMC set member, Kent Mercker. Merker played 18 seasons, probably the longest career in the pack. He last played in 2008. He was featured here in September 2011.

Topps goes back to the start of Mercker's career, noting on the card back that he started at single-A Bradenton. He then moved to Durham in 1988, earning co-Pitcher of the Year honors and playing in the Carolina League All-Star Game. 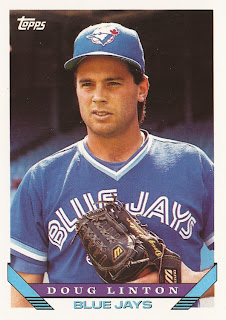 Linton made the CMC set as a member of AAA Syracuse. Topps goes back to that season on the card back, noting he led the International League in innings pitched and shutouts that year in 1990.

It also shows the odds he beat in making the majors, much less pitching through 2003. Linton was selected in 1986 draft, in the 43rd round.