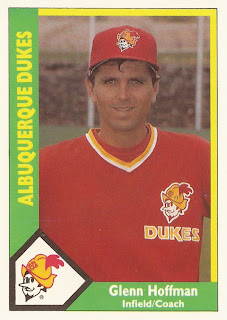 Interviewing in 2003 for the top job of the team he once played for, Glenn Hoffman told The Hartford Courant he was open to the growing use of statistics in managing.

But he also told The Courant, a large part of managing and baseball was still instruction.

"We can give them all the information we want and we can help them," Hoffman told The Courant. "But I think the biggest thing is communication and how you get it across. There might be one way to do it through video and one way through stats and stuff like that, but it's also instruction. You have to get out there and show the guy the correct way to do it and do it over and over and over.''

Hoffman interviewed for the top job with the Red Sox, having been a big league manager himself, in an interim capacity with the Dodgers in 1998, and after a long playing and coaching career.

The Red Sox manager's job, though, didn't go to Hoffman. Instead, it went to another longtime player with big league managerial experience, Terry Francona.

And, while Hoffman hasn't returned to the manager's office, he has continued his lengthy coaching career. He has continued to coach into 2011, his sixth season as third base coach for the Padres.

Hoffman's coaching career began as his playing career ended, in 1990. He served that year as a player and a coach with the Dodgers at AAA Albuquerque. The next season, he moved to the minor league manager's office, at rookie Great Falls.

Hoffman moved to Vero Beach as manager there in 1992, then AA San Antonio in 1993. By 1994, he was the Dodgers' minor league coordinator. In 1997, he became manager at AAA Albuquerque.

At Albuquerque, Hoffman watched over Todd Hollandsworth, who returned to the minors after winning Rookie of the Year honors in 1996. "Todd's just coming down to work on his hitting, get him on track and get him back to the big leagues as soon as possible," Hoffman told The Associated Press that June.

By June 1998, Hoffman was interim manager of the Dodgers, after the firing of Bill Russell. Paul Konerko, who played under Hoffman at Albuquerque, compared the two managers to The Los Angeles Times, saying he believed Hoffman would be more vocal.

"Hoff is much more hands-on and communicates with players maybe a little better," Konerko told The Times. "That's not to say Bill did a bad job, but Hoff will get up in your face."

The Dodgers ended up going 47-41 under Hoffman. But the Dodgers never removed the interim tag. He returned in 1999 with the new title of third base coach, a job he stayed with through 2005.

In one 2003 game, the third base coach Hoffman waived around Dave Roberts with the winning run, beating a throw from the Expos' Vladimir Guerrero.

"We're being aggressive and forcing them to make the play," Hoffman told MLB.com afterward. "It's two out and a game situation and the ball is hit hard. You know it will be close with his arm. It's a matter of whether it's on line and if they hold onto the ball. Roberts gave me a good effort and it worked out."

In 2006, Hoffman joined the Padres and brother, Padres closer Trevor Hoffman, with San Diego, becoming that team's third base coach. Glenn Hoffman has stayed through 2011.

In July 2011, Hoffman's coaching abilities helped the Padres steal a run by his base runner stealing home on the pitcher's throw to first, The San Diego Union-Tribune wrote.

Hoffman spotted the opening, telling runner Chris Denorfia he could make it. And Denorfia did. "We stole a run," Hoffman told The Union-Tribune.