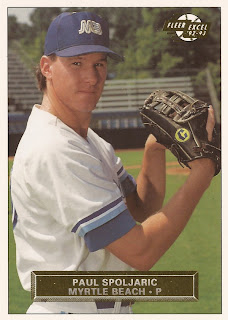 Paul Spoljaric came into the game in the 10th inning. Three innings of perfect pitching later and Spoljaric had his first major league win.

"I didn't feel like I had my best stuff," Spoljaric told The Associated Press after that July 1996 game. "But I went right after the hitters."

Spoljaric was in his 13th major league outing in that game, his second season with time in the majors. He went on to pitch in parts of six big league seasons.

His first major league time, though, came in April 1994, two years after he played for the single-A Myrtle Beach Hurricanes. Myrtle Beach was the team that Spoljaric appeared with on his 92-93 Fleer Excel card.

His Excel card also happened to be among a recent batch of cards I picked up in Vermont.

Also among particular batch of cards were five CMC set members, all of whom have been featured here. Spoljaric wasn't in the CMC set himself, but he was in the minor leagues in 1990, playing at rookie Medicine Hat. 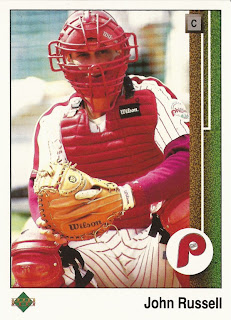 John Russell appeared in the 1989 Upper Deck set going into his sixth season in the majors. By the time the 1989 spring training was out, Russell was with the Braves. The '89 Upper Deck card back has no text, just stats. The photo shows Russell in his catching gear, in a throwing motion.

By the time 1990 came along, Russell started back in the minors at Oklahoma City, getting into the CMC set. Later that year, he caught Nolan Ryan's sixth no-hitter. Russell served from 2008 to 2010 as the manager of the Pirates. His Greatest 21 Days feature came in August 2010. 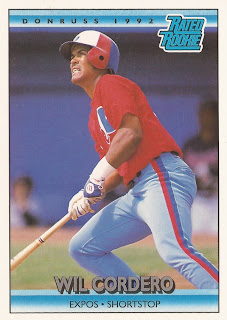 Wil Cordero's top career highlight up until 1992, according to his 1992 Donruss card back, was missing the final two months of the 1991 season due to a broken hand.

His second career highlight? He hit .232 in 1990 at Jacksonville. It was with Jacksonville that Cordero made the CMC set.

Still, though, Cordero was a Rated Rookie. Cordero earned the title, playing 14 seasons in the majors, getting an All-Star selection in 1994. For Cordero, his most memorable moment was his first big league game, something noted in his March 2010 Greatest 21 Days feature. 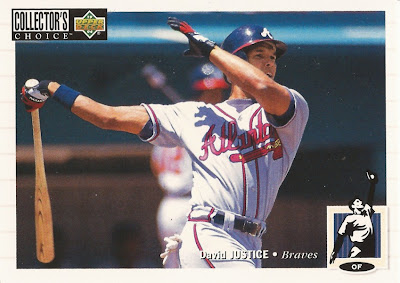 David Justice's 1994 Upper Deck Collectors Choice is another Upper Deck card with no text, all stats, on the back. The back has a photo of Justice holding up a ball, his glove on his hip.

Justice appeared in the CMC set as a member of the Richmond Braves. By that May, Justice was in the majors to stay, helping the Braves to three World Series. His Greatest 21 Days feature came in April 2011. 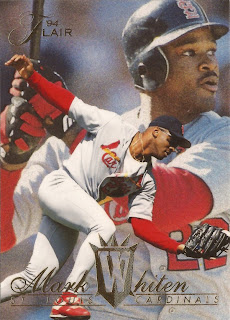 Mark Whiten's 1994 Fleer Flair card is another one with no text on the back, though the two photos on the front are interesting.

But, close looks at the photos on the front and back do give a piece of information that is not included on the card: Mark Whiten is a switch-hitter. In the background picture on the front, he is batting right-handed. On the back, he is swinging left-handed. Whiten's feature came in May 2010. 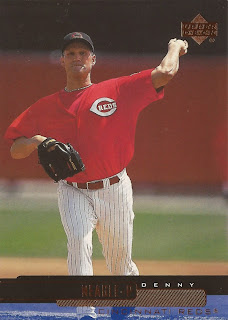 That was also the year that ultimately got Neagle into the Mitchell Report. Kirk Radomski told Mitchell he met Neagle in a club after Neagle arrived with the Yankees, selling Neagle HGH.