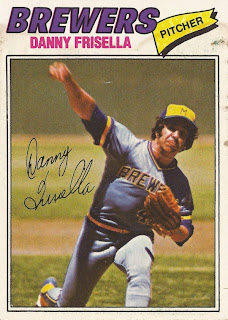 Danny Frisella was a joker who kept his teammates loose. He was a team player, who encouraged his fellow Brewers. He was just a good guy, teammates and those who knew Frisella told The Milwaukee Sentinel.

They recounted the Frisella they knew after Frisella's passing in January 1977, from a dune buggy accident.

"When you were down, he would pat you on the back and say 'Get 'em next time," teammate Jerry Augustine told The Sentinel. "He was really good for the young players and kept everybody loose. I just can't believe he's really dead."

Frisella made that impression though his time with the Brewers was brief. Traded there in June 1976 from the Cardinals, he still managed to get into 32 games for the Brewers, compiling a team-leading nine saves.

Frisella's accident happened that Jan. 1, meaning that by the time his 1977 Topps card came out, he had already passed.

Frisella's card came in a grab bag group I recently picked up on a trip to Vermont. There were actually six 1977 Topps cards in the group: Rick Sawyer, Ron Reed, George Mitterwald, Bob Montgomery and Tony Muser. 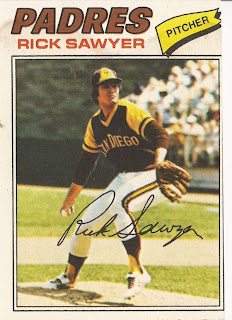 Rick Sawyer was entering his fourth major league season in 1977. It would also prove to be his final season. Sawyer debuted with one game in the Bronx in 1974, his seventh season as a pro.

The back of his Topps card has his stats back to 1968 in Reno. He got into four games there, giving up nine earned runs in 10 innings.

It also has a cartoon about a cartoonist, noting former major leaguer Al Demaree, who played eight seasons in the 1910s, became a cartoonist. 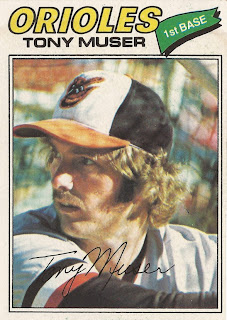 Tony Muser was going into his eighth of nine seasons in 1977. Topps notes that Muser was used as spot starter and defensive replacement during his time with the Orioles. In 1975, he hit .308 while pinch hitting. Overall that year, he hit .317 in 82 at bats.

As pinch hitters go, the first pinch-hit grand slam, according to the cartoon, was hit by the Cardinals' Mike O'Neill June 3, 1902. 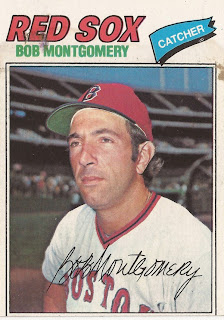 Bob Montgomery got into 10 big league seasons, all of them with Boston. In 1977, his eighth season with time in the majors, the catcher got into 17 games. He also never played in the minors after 1970.

In 1976, Montgomery got into 31 games, with three home runs. One of those home runs, Topps notes, was key to a Boston win over the Yankees. In 1975, he had four of the team's first 11 game-winning RBIs, Topps notes.

The 1977 set was coming off a presidential election year, noted in the Montgomery cartoon. Campaigning that year for Gerald Ford was Joe Garagiola, the cartoon explains. 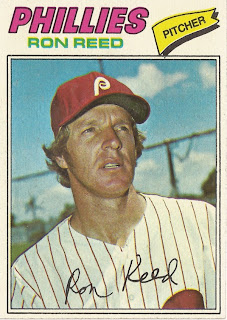 Ron Reed had a long major league playing career. He also had a short National Basketball Association career. Reed played 19 seasons in the majors, 1977 was his 12th. He also played two seasons in the NBA with the Detroit Pistons, according to Basketball-Reference.com. Topps skipped that piece of information for 1977.

During his basketball years, Reed made the majors, but only for two games in 1966 and three in 1967. After that, his big league pitching time increased. He played into 1984.

According to the cartoon on the back, Roberto Clemente was the hitting star of the 1971 World Series. 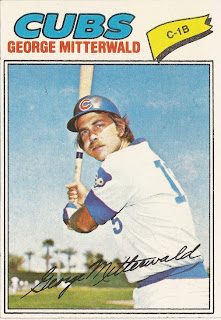 George Mitterwald was also going into his final season, his 11th, in 1977. Mitterwald spent most of that time with the Twins. He spent his final four seasons with the Cubs.

He went to the Cubs after a 1973 season where he was the American League's top defensive catcher, according to the card back. He debuted at first base April 12, 1975.

The cartoon includes the nickname of Willie Jones. Jones played 15 seasons in the majors, from 1947 to 1961, mostly with the Phillies. According to the cartoon, Jones' nickname: Puddin' Head. Back to Frisella, though. While that 1977 Topps card was his last individually. His memory did make it on to several cards from the 1978 set.

The Brewers chose to honor Frisella by wearing a black arm band in his memory throughout the 1977 season. Without having a 1978 Brewers card handy, a quick check of Ebay shows those black arm bands honoring Frisella made it onto several 1978 Topps Brewers, including the Charlie Moore card above.