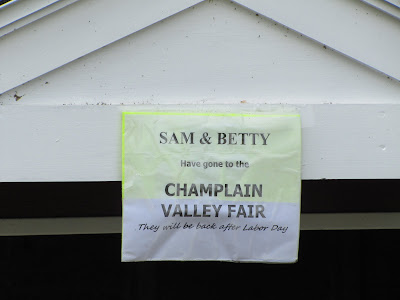 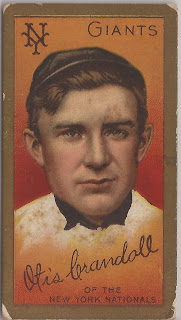 What can a Christmas gift, booked up hotels and a pair of swans lead to?

Let me explain. My road to my very own cigarette card began last Christmas. For the second Christmas in a row, my wife got me tickets to a minor league game.

For Christmas 2009, that led to my very first two interviews on this blog, Dann Bilardello and Roger LaFrancois, the manager and coach at short-season Batavia.

This past Christmas, my wife got me a ticket pack to the Vermont Lake Monsters, one that came with a bobblehead of their mascot, Champ.

The season came and almost went, and we hadn't gotten up to Vermont. Our last chance came Labor Day weekend, after a wedding in Massachusetts.

The wedding complete, we headed up to Burlington, VT for the Lake Monsters game. I'll get into the game a little more in a separate post.

After the game, though, came the hotel part. My wife asked earlier if I'd gotten a hotel. Thinking it would be easy to get one, I hadn't. Well, it was opening weekend for the local colleges there, and every hotel I called was booked.

Finally, we found a hotel, about 35 miles north of Burlington, in Swanton. We'd actually stayed at that same hotel about four years earlier, on a November trip through northern Vermont. I remembered seeing a flier then for the swans of Swanton. 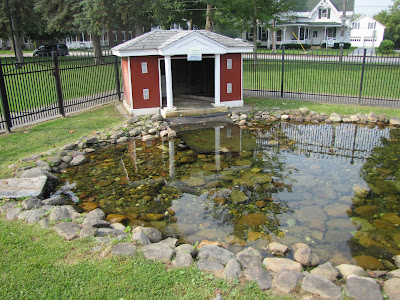 The Sam and Betty's pen in Swanton

The swans lived the summer on the town green. But, by November, were in a private yard. Remembering that, in the morning of this trip, we went to see if they were out. We found their pen, with their little house, in the town park. But they weren't there.

In their place, there was a sign saying the swans, Sam and Betty, were away at the Champlain Valley Fair. Not sure exactly where it was, we snapped a couple pictures and made our way back down to Burlington.

A radio ad told us where the fair was, just outside Burlington. We were going to the fair.

Walking around the fair, trying to find the swans, I remembered going to the Iowa State Fair as a kid. There was a flea market there, with one stall that had baseball cards. I remember directing my parents to that area when we went, to look at the cards. It was always a highlight of the trip.

I told this story to my wife as we walked, and came upon a grandstand area with a bunch of stalls inside. On a hunch, I directed us that way. And there was a stall of baseball cards.

My kind wife left me to look around. The guy had a bunch of grab-bag type offerings. Those are always fun to open. The junk era are better, but he had a lot of newer stuff. 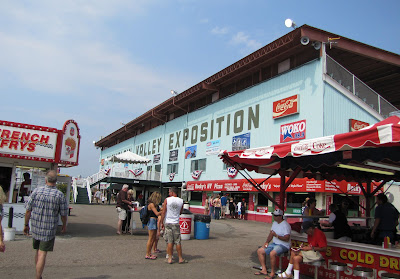 He also had a display case with some single cards. Inside were a bunch of older cards, really older cards. Like teens, 20s and 30s. And he had reasonable prices on them.

Any one of them would have been cool to own. But I zeroed in on the oldest I could afford. And that was a 1911 T205. It was Otis Crandall, member of the 1910 New York Giants.

I couldn't pass it up. After quickly confirming with the seller that it was original, I was the proud owner of a 1911 Otis Crandall Hassan Cork Tip Cigarettes card.

So that's how I came to own a card that is 100 years old this year.

As for the swans, we finally found them, in the middle of ducks, geese and chickens that were all for sale. The swans, of course, were not for sale. That's what the clerk told us when we tried to ask if they were the Swans from Swanton, Sam and Betty themselves.

There was actually no sign on their pen to mark their lofty status as Swanton's Swans. But, after getting our question out, the clerk confirmed their identity. 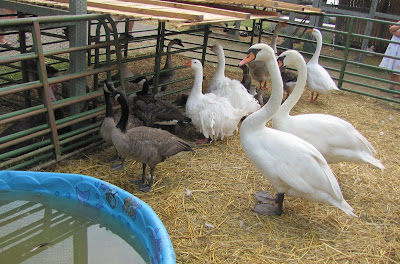 Sam and Betty at the fair.

By the way, according to the story of the Swanton Swans, the town has had them since 1961, the original pair given to them by Queen Elizabeth II herself.

The cool thing about that is, when Swanton first got those swans, that Otis Crandall card was already 50 years old.

And watch for more on Otis "Doc" Crandall soon. I think I'm going to try and do a CMC-style research post on him. The Google News Archives go back that far. I'll see if I can make it work.
Posted by Steve78 at 12:00 PM