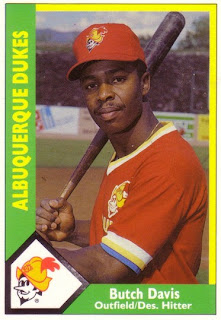 Butch Davis never had a full-time job in the majors, but he did get there for parts of eight seasons.

The part-time nature of his major league service, though, never deterred Davis, he told The Washington Post years later.

"I still went out and played hard, because I wanted to get back," Davis told The Post, "and I knew what it took to get back."

Since his playing days, Davis has gotten back into the game as a manager, coach and coordinator in the minors.

Davis' career began back in 1980, taken by the Royals in the 12th round out of East Carolina University. Davis made AA Jacksonville in 1982 then AAA Omaha and major league Kansas City in 1983.

"I couldn't believe it - I was so happy I was rejoicing out there," Davis told The Lawrence Journal-World after the game. "It was a big thrill hearing those fans cheer for me."

Davis ended up hitting .344 in 33 games that year. He also picked up six triples to four stolen bases. Two of those triples came in the same game, his 27th in the majors, the Baseball-Reference blog notes. The outfielder returned in 1984, but for 41 games. He also hit just .147.

Over the next eight years, Davis got into just 26 major league games. From 1984, he didn't get back until 1987, seven games with the Pirates. He got into 13 games the next year for the Orioles and five more in 1988.

Also during that time, Davis got into the quintessential move about minor leaguers looking to make it to the majors. Davis had a small role in "Bull Durham," The Los Angeles Times wrote.

There was one game in 1991 with the Dodgers. Then Davis' patience paid off. He caught on with the Rangers for 1993, getting into the most games of his career: 63.

The Rangers manager was Kevin Kennedy, the manager Davis had back in 1990 and 1991 with the Dodgers at AAA Albuquerque, The Associated Press noted in May. That month, Davis hit two doubles in a game, and his first big league home run in nine years.

"It's always worth it at a moment like this," Davis told The AP after those doubles and that home run. "I wouldn't give it up for anything."

And he got hit in the head. Davis rounded the bases, losing his helmet. As he neared home, the relay hit him square in the head. But he made it.

Davis got into four more games in 1994, ending his career. He's gone on to serve as a hitting coach and manager in the minors with the Orioles. In 2007, he served as the Orioles minor league outfield and bunting coordinator.

"I told him the other day, `You need to go out there during BP and take balls off the bat,' " Davis told The Sun. "That's going to be the most important thing for him. We can hit him fungoes all day long and he can cheat with the fungo, but for him to actually get better, he has to get them off the bat live."