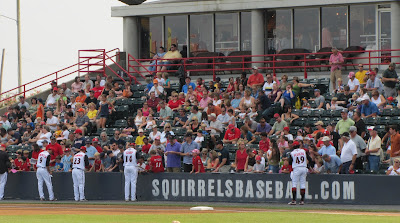 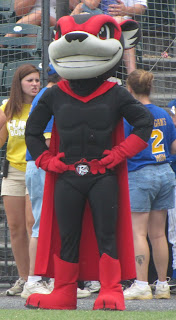 Whenever we go on trips, we always check Roadside America to see if there are any squirrel destinations - or really anything else cool - near our route.

Squirrels playing baseball? Now that's as good of a reason for a road trip as any out there.

Even better: The manager of this squirrel team? CMC set member Dave Machemer.

So that's what we did this week. We hopped in the car and traveled to Richmond, Va., to see the Richmond Flying Squirrels take on the Harrisburg Senators in a AA Eastern League matchup.

It was a trip we'd hoped to make since last year, when the Squirrels came into being after moving from Norwich, Ct. But it didn't fit into last year's schedule. We had also planned to see them this past April in Altoona, but weather threatened and we went to Bridgeport, Ct. instead. 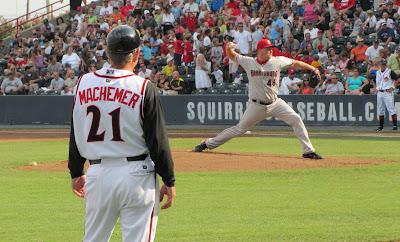 The Machemer interview was obviously the highlight of the trip. He graciously spent more than a half hour of his prep time for that evening's game, talking about his four-decade-long career in baseball. The first part of the interview should be up tomorrow.

But Machemer wasn't the only CMC set connection in Richmond. Both teams playing were in the set, or at least the franchises. The stadium was also home to another team.

Richmond, of course, was the longtime home of the AAA Richmond Braves. The logo on the Richmond CMC cards celebrates their then-25 years in the city. By then, the R-Braves had been in their home The Diamond for five seasons. But you'd never know what stadium they were in by their CMC cards, all the photos were head shots, with no background to be seen.

The visiting Harrisburg Senators were in the set and are still playing with the same name and in the same city as they did in 1990. The Squirrels were in the CMC set, too. They were in it as the Albany-Colonie Yankees.

The A-C Yankees franchise moved to Norwich for 1995, before it moved to Richmond for 2010. 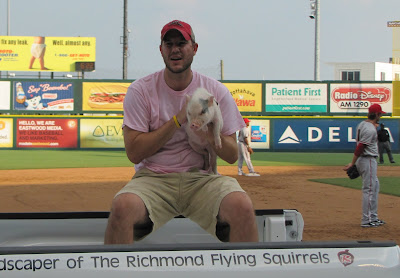 Parker the Rally Pig on his first trip through the stadium.

At the game itself, we had a great time. There was the Flying Squirrel himself, Nutzy, and his friend the grinning acorn named Zinger. There was also Parker the Rally Pig.

Parker did his job. Brought out for a lap before the bottom of the ninth, the Flying Squirrels rallied for a walk-off win.

The CMC connections and squirrels aside, there was also a possibility that we would see Bryce Harper play for Harrisburg. He, of course, had just gotten called up to AA.

It wasn't until we got there that I found out Harper wasn't there. He was at the Futures Game in Phoenix. I didn't care, we got to see the squirrels and get my eighth interview.

Be sure and check out the Dave Machemer interview: Credit to Others
Posted by Steve78 at 1:00 PM