Dick Williams and the Hall of Fame Classic 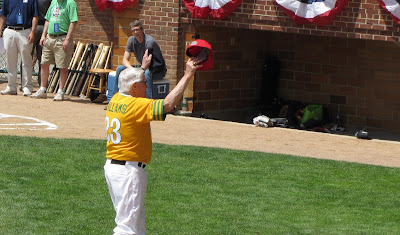 My wife and I were at a show last night. It was our 4th anniversary and I know I shouldn't have been checking my e-mail, on her phone no less. But I did, and that's how I happened across an article announcing the passing of Dick Williams.

Shocked, I told my wife. It took a couple extra details for it to sink in who I was talking about. She's not a big baseball person, so Dick Williams the Hall of Fame manager who took three different teams to the World Series, wasn't the piece of information to jog her memory. The Rick Lancellotti Dick Williams was.

He was also the Dick Williams we'd seen not three weeks earlier at the Hall of Fame Classic in Cooperstown. 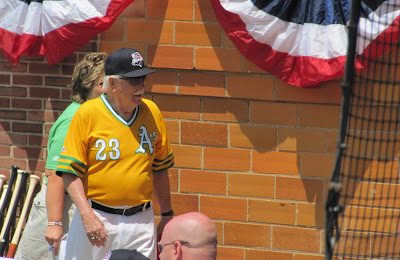 I started my baseball life in 1987, too late for Williams' heyday as a manager. At some point I became aware of the Padres beating the my Cubs in 1984, but I never linked that to Williams. What I knew of Williams came from his Topps cards, as the manager of the Mariners.

But it was my interview with Rick Lancellotti that finally drew my attention to Williams in February. Williams figured prominently in Lancellotti's story. You can read the Lancellotti interview for the full context. (The February Interview) Williams, I'm sure, would have told many stories from his Hall of Fame career before Lancellotti would come up, if at all.

In June, we had already planned to attend the Hall of Fame Classic, when I realized that, not only would Lancellotti be there, but Williams was there to, managing both teams. 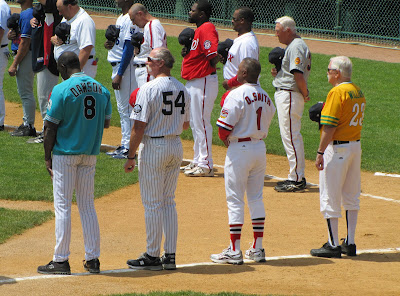 That storyline, if you could call it that, gave my camera something to focus on. Rick Lancellotti, of course, as a CMC set member and one-time interviewee. But it also focused my camera on Williams, when it wouldn't otherwise have been.

I went through my photos of that day and pulled out several of Williams that I haven't posted yet.

I didn't think of attending last year's Classic until it was too late. Last year included Hall of Famers Bob Feller and Harmon Killebrew. Both passed away before they could return to the Classic. I'm glad we were able to see the Hall of Fame manager Williams before he passed.

By the way, the Classic added one more win to Williams' long list of wins, nevermind he managed both teams.

Other photos of Dick Williams at the 2011 Hall of Fame Classic: 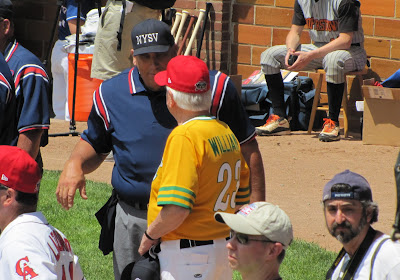 Dick Williams with an umpire before the game. Williams had many encounters with umpires in his Hall of Fame career. 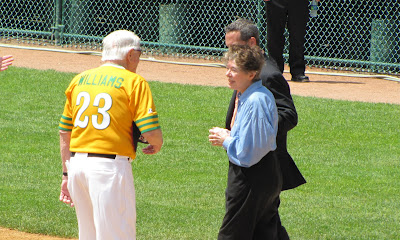 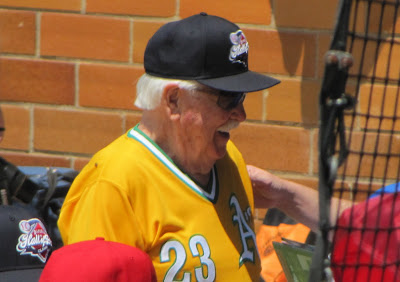 Dick Williams has a laugh before the game. 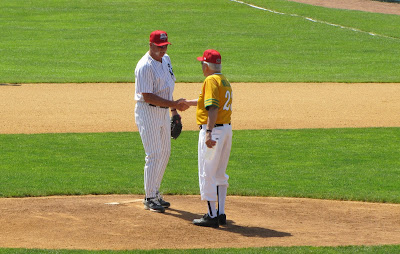 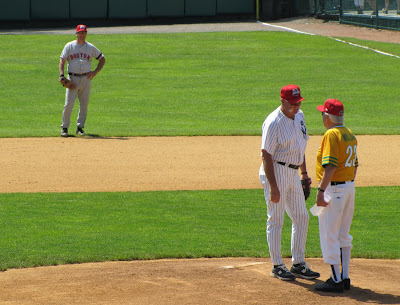 Williams and Gossage on the mound, with Rick Lancellotti in the background playing first base. 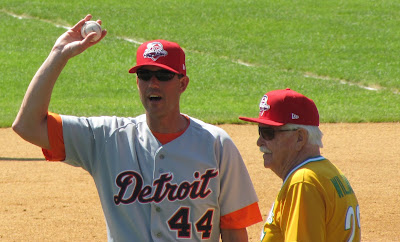 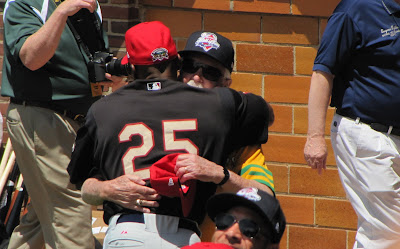 Dick Williams and CMC set member Reggie Sanders hug before the game.
Posted by Steve78 at 10:00 AM

Email ThisBlogThis!Share to TwitterShare to FacebookShare to Pinterest
Labels: Cooperstown