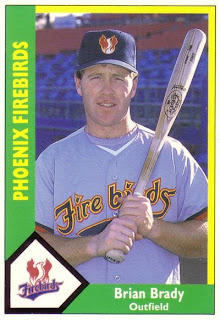 Brian Brady got his first major league hit and RBI April 16, 1989. It was a time to celebrate.

"It's the only thing that's going to settle my stomach," Brady told The Times afterward, grinning. "I'm still a little too excited to eat. Too much adrenaline is still pumping."

Brady needed to take time to enjoy it. For him, it didn't last long. Just one more game and Brady's major league career was over.

Brady's professional career began five years earlier, in 1984, taken by the Angels in the sixth round of the draft out of the New York Institute of Technology.

Brady's performance at Redwood helped earn him a trip to AA Midland for 1986. There, he again hit .290 and hit 11 home runs. In a second year at Midland, Brady hit .288 with nine home runs.

Though he started just 1 for 6 at Edmonton, the call came early, April 10. Angels outfielder Tony Armas strained his hamstring. Brady got into his first game that April 16.

The Angels already blowing out the Mariners by a score of 9-0, Brady came into the game, pinch hitting for Claudell Washington. Brady hit a double to right, knocking in the Angels' 10th and final run on the day.

His next, and last, major league plate appearance came April 22. His team down by one to the Athletics, Brady came in against future Hall of Famer Dennis Eckersley. All Brady could do was strike out swinging.

It wasn't Brady's last encounter with someone who has Hall of Fame credentials. That would happen years later, after Brady's own career ended in 1990, playing AAA ball for the Giants at Phoenix.

That next encounter was in 1997, with Pete Rose. In a story told by Esquire's Scott Raab in a post during a World Series blowout, Raab tells of Brady's encounter with an uninterested Rose at an autograph show in Texas.

Brady told Rose that Rose, Raab recounted, that he hustled in the minors just like "Charlie Hustle" himself.