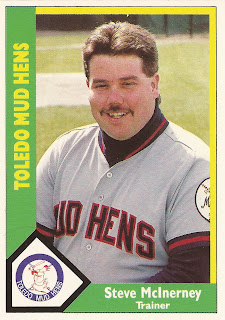 Each student that joins an Oswego (Ill.) High School sports team undergoes a basic test, called ImPACT that gives a comparison should that player ever suffer a concussion, Oswego athletic director Steve McInerney told The Oswego Ledger-Sentinel in March 2011.

The baseline test, McInerney told The Ledger-Sentinel, allows them to help properly respond to an injury when it happens.

"Every concussion is different," McInerney told The Ledger-Sentinel, "but when a player is believed to have one, they are removed from play and they are evaluated by the athletic trainer and a physician."

McInerney could even respond himself. The Oswego athletic director was once a trainer in the Tigers and Blue Jays systems, and still is a certified trainer.

McInerney's career as a trainer in the Tigers system began in the 1980s. In 1989, he became trainer for the AAA Toledo Mud Hens.

In August 1989, McInerney helped contribute to a solid eight-inning outing by pitcher Brian Dubois, The Newport News Daily Press wrote. Dubois suffered a cut to the index finger on his pitching hand. McInerney got him ready to pitch by applying new skin to the cut and watching it over Dubois' outing.

In 1991, McInerney served as trainer for the American League team at the AAA All-Star game. He also got a late-season call-up to Detroit, serving as a major league trainer at Tiger Stadium.

For 1993, McInerney joined the Blue Jays system, at AAA Syracuse, winning International League Trainer of the Year honors for 1995.

Then, in 2006, he became athletic director at Oswego. In 2007, he received the Illinois Athletic Trainers Association Hall of Fame Award.