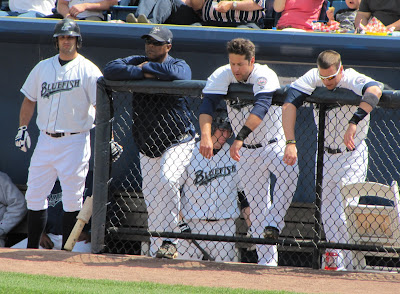 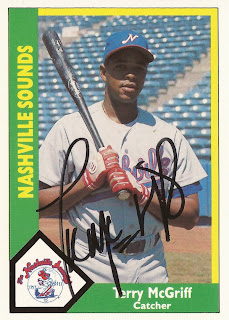 For Terry McGriff that series marked a realization: His playing days were almost over.

"It was kind of like icing on the cake a little bit," McGriff told The Greatest 21 Days in an interview recently. "It was beautiful. After that, I was at peace."

McGriff went on to play two more seasons for the Bluefish, ending his playing career 21 years after it began. But, while he was at peace with his playing days ending, he is continuing his career in baseball, spending much of his time since as a Bluefish coach.

McGriff spoke to The Greatest 21 Days before a recent game at Bridgeport's Ballpark at Harbor Yard. In the interview, McGriff spoke of his long career playing baseball, the butterflies of debuting in the majors and the honor of meeting the Hall of Fame catcher that McGriff had once told his father he wanted to be better than.

He also told of the decision that sent him on the path to the major leagues.

McGriff grew up in Fort Pierce, Fla., playing both baseball and football. In baseball, McGriff starred as a catcher, following his father Roy to the position. It was also a position shared by major leaguer and Hall of Famer Johnny Bench.

Bench was a player the young McGriff heard much about, he recalled.

"He'd always talk about Johnny Bench," McGriff recalled of his father. "I said, one day, I wanted to be better than Johnny Bench."

Though he never did fulfill that declaration, McGriff did his best. He even got himself drafted into the same organization has the catcher he'd looked up to, the Reds. 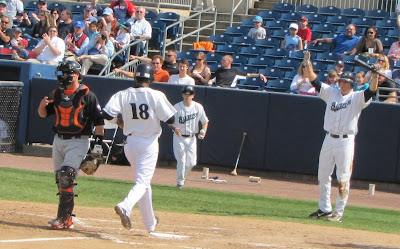 Bluefish Prentice Redman crosses the plate in an 8-7 Bluefish win May 1, 2011.

In the June 1981 draft, Cincinnati selected the young backstop in the 8th round, directly out of Westwood High School in Fort Pierce, Fla.

Therein was the McGriff's choice: Choose football, which was his first love; or choose baseball, which McGriff saw as the more pragmatic choice.

For McGriff, it was the pragmatic choice.

"I only weighed maybe 180-85 pounds," McGriff told The Greatest 21 Days. "When you travel and you go to different colleges, these guys are huge. I figured my career wouldn't last that long because I was thin. I figured baseball would be my best option." 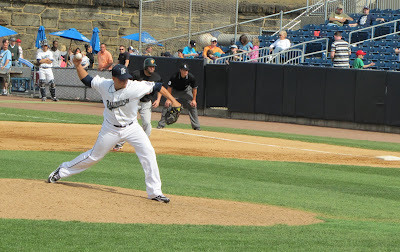 Bluefish reliever Chris Rivera delivers to the plate May 1, 2011.

So McGriff, who wouldn't turn 18 until that September, chose the Reds, playing his first year at short-season Billings. McGriff then started the slow ascent to the majors.

He didn't make AA until his fifth professional season. He made AAA in his sixth. He made the majors finally in 1987, his seventh as a pro. He was still just 23 when he got that first call.

McGriff referenced his age, saying he wasn't disappointed those years in the minors. Cincinnati, he recalled, was an organization that brought players up slowly.

The goal, though, never changed.

"I knew what my dream was and I knew it wasn't going to be an easy road," McGriff said.

He also played on some good minor league teams, McGriff said. That helped.

"We were having fun and we were playing baseball," McGriff said. "Time just passes by."

He finally realized that dream in July 1987 with his first call up. His debut came that July 11, at home against the Expos.

The debut came as a late-game substitution. Manager Pete Rose yelled to "Mac" that he was in the game. McGriff described it as a surreal moment.

McGriff went 0 for 1 in that appearance. His next came as a starter, against the Mets. He went 1 for 5 in that outing, with an RBI.

"After that," McGriff said, "the butterflies left, because that's what I wanted to do and that's what I worked so hard for. And it was there and I was ready to go."

Check Out Part 2: Soaked It In 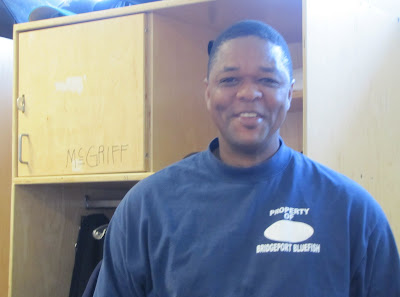