Tom Poquette, Pool of Blood - Then and Then 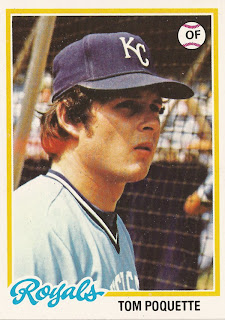 The bases loaded in this June 1976 game and Tom Poquette found himself running after the long fly ball. He couldn't get to the ball, but he did get to the wall, smashing into it and smashing his cheek bone.

"I remember seeing the pool of blood on the ground," Poquette recalled to The Associated Press two decades later. "I tried to get up, but I couldn't. I saw the blood and went back down. Then I drifted in and out."

The ball fell, and with Poquette motionless, it went for an inside-the-park grand slam. Poquette, however, would return in just a month, and help lead the Royals to their first division title in team history.

Poquette was in his second season with time in the majors in 1976. He'd seen 21 games for the Royals three years earlier, in September 1973. He'd been drafted by the Royals in the fourth round of the 1970 draft

But, despite the injury in 1976, Poquette still got into a total of 104 games and hit .302 on the season. By mid-May that year, Poquette was still the Royals backup outfielder. But he got into one game, hitting a triple and a double, UPI wrote. 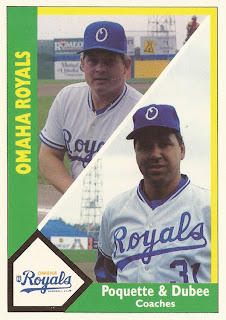 "I've been getting the chance to play lately," Poquette told UPI after that game. "When you get a chance, you have to take advantage of the situation."

Days before smashing into the wall, Poquette smashed five balls for hits, going 5 for 6 and scoring five times in a game against the Tigers. Poquette returned July 16. By October, he was the Royals' top rookie and disputing those who said the Royals had backed into the division title.

"We won it back in May, June and July when we had those good winning percentages," Poquette told reporters then.

Poquette also helped the Royals to a win in the playoffs with a single and a run scored.

In Boston, Poquette got hot, hitting .331 in 63 games. But another injury, one that he couldn't come quickly come back from, prevented him from building on that momentum. A separated rotator cuff took him out for the season. He returned for 33 games in 1981 and 24 more back with the Royals in 1982, ending his playing career.

But, in spring 1980, when the separation was discovered by team doctor Dr. Frank Jobe, Poquette tried to be optimistic.

"Dr. Jobe said I have a 90 percent chance of recovery," Poquette told UPI. "He felt that way because I'm an outfielder and I'm young. If I was a pitcher, it wouldn't look so promising."

He later went on to two decades with the Royals as a coach and manage in the minors, along with a stint as the major league hitting coach.