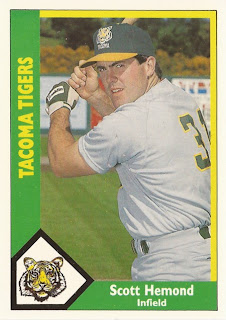 Scott Hemond served as Terry Steinbach's backup in 1993 and he was fine with that. So when he had a good game in Steinbach's place, he knew where he was going next: back to the bench.

"My job is to give Steinie a rest," Hemond told The Associated Press that July after hitting his first major league home run and knocking in five. "Hitting is secondary to me. When I go to the plate, I'm not looking for any certain pitch. I just try to put the ball in play."

Hemond was in the midst of his fifth season with time in the major leagues. And, being Steinbach's back-up, he took over that August after Steinbach broke his wrist. He went on to play in 91 games that year and 91 the next, the most major league playing time he would see in his seven-season career.

Hemond's professional career began in 1986, selected by the Athletics in the first round, 12th overall, out of the University of South Florida.

Going into draft day, Hemond had been high on several lists. And Hemond shared those high hopes. Peter Gammons had him in the top three picks, The South Florida Sun-Sentinel wrote in February 1986.

"I was astonished when I read that," Hemond told The Sun-Sentinel. "It was nice to read that, but it didn't really have any effect on me. I just go out and play hard and see what happens."

Hemond played that first season at single-A Madison, hitting AA Huntsville in 1987. He stayed in Huntsville through 1989. It September 1989, Hemond made the jump to Oakland, getting into four games for the Athletics, without an at bat.

He got into seven more major league games in 1990, getting his first two major league hit. He played that year largely at AAA Tacoma.

Over the next two seasons, Hemond got into a total of 48 major league games. In late 1992, the White Sox selected him off waivers, and he played eight of his games there.

His stint there was brief enough for him not to have a nameplate on his locker, The Chicago Tribune wrote. Hemond responded by telling The Tribune it was OK, he knew where his locker was.

Returning to the Athletics for 1993, Hemond got into his 91 games. In early June, he hit a two-run double in an Oakland win.

"I don't get in there that much," Hemond told The Associated Press, "so I have to be aggressive in my mind set. Sometimes I just think too much, though, when I get up there. I don't play enough to be thinking too much."

In late July, before Steinbach's injury, Hemond got into a game and hit that first major league home run.

"I didn't know if it was out or not," Hemond told The Youngstown Vindicator. "I was just trying to hit it up the middle, but I knew I had a good swing and got the sweet part of the bat on the ball."

One more season at AAA, then underwent shoulder surgery. He returned two years later as a player-coach with independent Amarillo, but his return didn't go as planned. He got a couple sacrifice flies in an early June game. But he hit little else, getting into only eight games, ending his career.