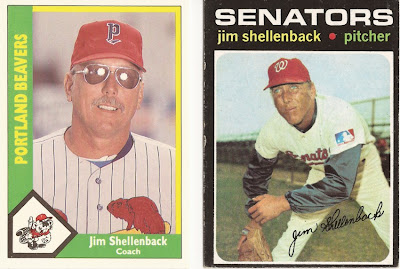 Well, actually, I ordered two cards out of my total of three. Both of the ones I ordered are early 70s CMC members. The one I didn't order was from 1986 and not a CMC member.

I've actually written about these before, when I traded for them on the site. Jim Shellenback was the first one I ended up with, after unlocking another 1971 card, Expo Gary Sutherland. That's it up top, paired with his CMC card. Shellenback was in the CMC set as a coach for the Portland Beavers. 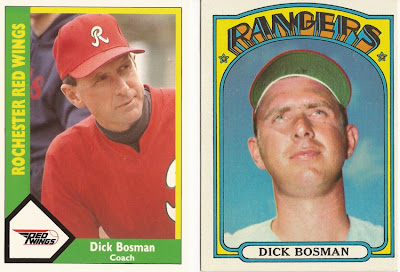 The randomizer has yet to select Sellenback for a feature. But it has since selected Dick Bosman. When I got the Bosman card in July, I shifted how I featured older cards of CMC members. The older cards were now a way in to feature the CMC coach's playing days.

I did that earlier this week with Jim Wright. Though Wright played in only two major league seasons, there were several cool and available stories about his run to the majors, as well as his coaching career.

I went to ebay looking for a Wright card. I found this cool seller who ended up having a bunch of old CMC member cards. I ended up getting 15, encouraged by free shipping and reasonable prices. Those should come soon. 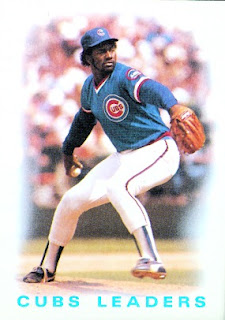 The other thing to note between the two Topps Million cards: Shellenback was a Senator with a visible hat, Bosman was a Ranger with a hat, taken so the Senators logo couldn't be seen. But you can make out his number on the underside of the brim: 27.

The third card I had in my Topps Million collection was the 1986 Cubs Leaders card, with Lee Smith. That one was cool because I unlocked it with a code I got from the Hall of Fame gift shop when we were there for Andre Dawson's induction ceremony. The Smith card with fitting because Dawson advocated for Smith to get into the Hall in his speech.

Even so, I couldn't bring myself to have it shipped. Among my Christmas presents was a box of 1986 Topps that I've been pacing myself on opening. A Cubs Leaders card has to be in there somewhere.
Posted by Steve78 at 12:00 PM