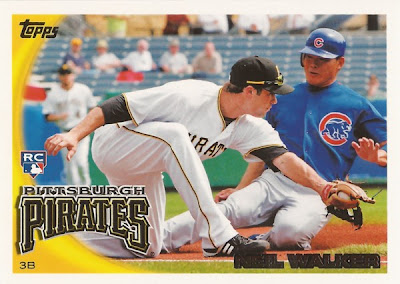 Happy New Year everyone. Hope everyone rang it in with some style. My wife and I and a couple friends tried to. By dropping some Mentos into some Diet Coke.

Despite what the title may imply, cards were not directly involved in the act of dropping the Mentos into the Diet Coke, or the ensuing fountain of fizzy soda drink. But they were involved in the procuring of the vital ingrediants of the New Year's method of celebration.

That's because it was my job to procure the method of celebration. It's something we've done before. It was also something that we'd gotten in or heads involved only a special kind of Mentos. Anyway, we found that apparently special kind of Mentos at the Rite-Aid a couple years ago. Rite-Aid also does the rare thing in pharmacies and non-big-box stores, in that they actually sell cards. Like back in the day.

Well, a couple years ago, as I was getting back into collecting, I purchased some Mentos and noted they sold cards right at the register. I purchased a pack. It was a fun New Year's thing.

So, this year when I went out to get the Mentos, I went back to Rite-Aid. I wasn't sure if they still had the "right" kind of Mentos still, but I picked up a roll. I also picked up a pack of 2010 Topps Series 1. The kind with the gum and the kind that apparently has no inserts.

I also considered the $5 repack of cards, but theorized I've already got too many of those cards to write about already. What I needed was a pack of cards with no obligations, you know, no obligations to blog about.

The 2010 cards fit that bill because there are only a handful of players or managers that connect back to the CMC set. Or even cards that others haven't, by this time, been blogged fully about. 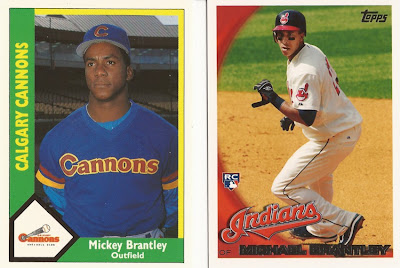 So I got the Mentos, Diet Coke and 2010 Topps cards. I got home and opened the pack before midnight. I was also pleasantly surprised. I got a direct CMC connection, by birth.

I got Indians rookie Michael Brantley, son of CMC set member Mickey Brantley. It says so right on the back. Though it doesn't actually mention his father's membership status in the CMC set. 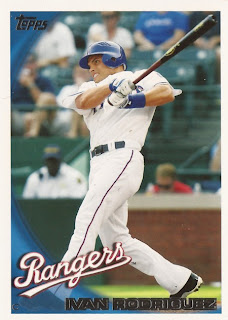 So that was cool, a quick bloggable pack for New Years. I also got an Ivan Rodriguez. My wife loves Pudge.

And that cool action shot up top of another son of a former major leaguer, Neil Walker, along with Cub Kosuke Fukudome. Walker's father, Tom Walker, played in the 1970s.

As for the Mentos and Diet Coke. It worked great. We got fizzy soda drink all over our sidewalk. 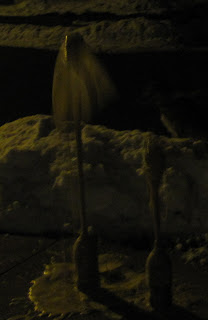 Sorry, the lighting wasn't that great.
Posted by Steve78 at 1:00 PM