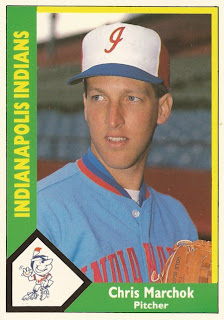 Chris Marchok had just been released by the Expos. For the first time in six seasons, all spent in the minors, Marchok was without a team.

Marchok set to work getting a new team. That work included simply throwing a ball against a wall to keep in shape, The Reading Eagle wrote in 1993.

"I love it," Marchok told The Eagle, after signing with the Phillies and reporting to AA Reading that May. "It's a great game. I started with I was 8 years old. I just want a chance to chase this career."

Marchok chased that career from the time he was a kid, through his time in college at Harvard, then after in the Expos and Phillies system.

Throughout his playing days, the goal was to make the majors. The thought of that, he once told an author, gave him goosebumps. But, his playing career finally ended with the end of the strike, and the thought remained just that, a thought. He never made the majors.

Marchok's professional career began in 1987, selected by the Expos in the 12th round by Montreal, out of Harvard. Throughout his career, Marchok was used mainly as a reliever.

Starting at short-season Jamestown, Marchok got into 18 contests. He started five, the most he would start in his career. He posted a 2.42 ERA.

That off-season, he made the Expos 40-man winter roster. He also made AAA Indianapolis. But, at AAA, the left-hander had trouble finding his way into games, teammate Steve Fireovid wrote in his diary of the 1990 season, The 26th Man.

Already in trouble in June, Marchok voiced his playing time frustrations to a friend. The friend inadvertantly referenced them, in front of Marchok's pitching coach, Fireovid wrote. "I don't know, Marchok told Fireovid later, "whether to laugh or cry."

Just over a week later, Marchok arrived back at AA. On July 6, pitching for Jacksonville, Marchok walked home a run. Between the two levels, Marchok still had an ERA of 2.60.

Marchok split 1991 again between AA and AAA. His ERA back at AAA Indianapolis that year hit 4.13. He spent his final year in the Expos system entirely at AA Harrisburg.

His final season as a professional came with Reading in 1993. His ERA there hit 5.59.

"I got goosebumps thinking about that," Marchok told author Hank Davis later about the thought of wearing a major league uniform. Marchok spoke to Davis for his book Small-Town Heros: Images of Minor League Baseball.

Marchok went on to a career in financial services, The Bucks County Courier Times wrote in 2009. Marchok that year returned to baseball, to coach the William Tennent varsity baseball team.