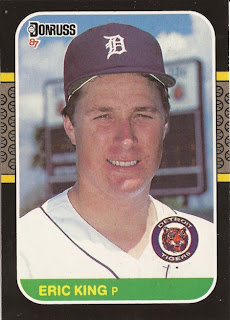 Eric King played the last season with the Giants at AA Shreveport, The Associated Press wrote in 1986. An off-season trade sent him to the Tigers. He started the season at AAA Toledo. He then started his major league career 3-0.

"I don't know why they traded me," King told The AP that June, "but I'm sure happy about it."

King went on to finish the season 11-4 with an ERA of 3.51. He also became "the big surprise of the Tigers' '86 season," according to the back of his 1987 Donruss card. King went on to play seven years in the majors, only matching that 1986 campaign once.

Among the future major league managers was a player that was involved in that Eric King trade, Bob Melvin. Melvin went the other way, to the Giants. He also went on to manage the Mariners in 2003 and 2004 and the Diamondbacks from 2005 to 2009. 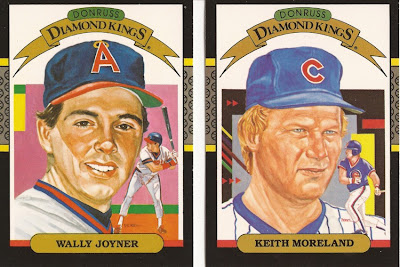 Speaking of Kings, there were two Diamond Kings in the packs, the Angels' Wally Joyner and the Cubs' Keith Moreland. Joyner, Donruss noted, replaced Rod Carew "and played the game like few rookies ever have.." He was also the first rookie voted into the American League All-Star starting lineup. "He is a young, vibrant, exciting Diamond King."

Donruss called Moreland a "consistent workhorse" for the Cubs. "He comes to play, makes the plays, is an excellent clutch hitter, and has the versatility to play right field, third base or catch." 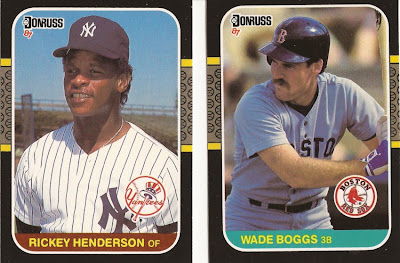 The two Hall of Famers in the packs were Rickey Henderson and Wade Boggs. Henderson was with the Yankees. Donruss noted he had eclipsed his own Yankee stolen base mark in 1986 with 87 stolen bases.

Boggs, Donruss noted, tied Hall of Famer Chuck Klein's record for most games in a season with at least one hit in 1985. 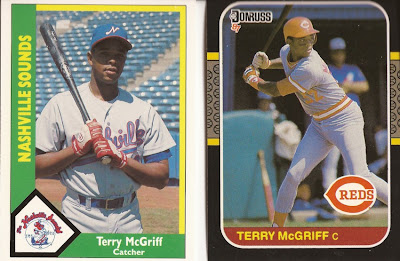 Of the two CMC set members in the packs, I've covered one, but haven't covered the other. The one I've covered is Terry McGriff. I covered McGriff back in April. At one point, he was among those looked at to replace Johnny Bench. 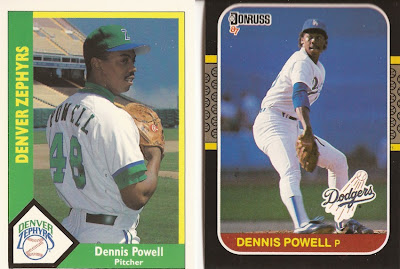 The other CMC set member, Dennis Powell, I haven't gotten to yet. He was a member of the Dodgers in the Donruss set, pitching in 27 games in 1986, going 2-7 with a 4.27 ERA. Donruss noted he was used as a spot starter. He made Los Angeles in 1985 after going 9-0 at AAA Albuquerque. 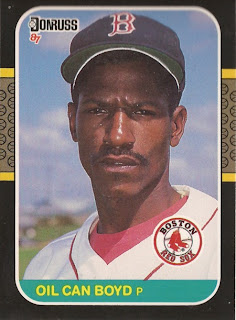 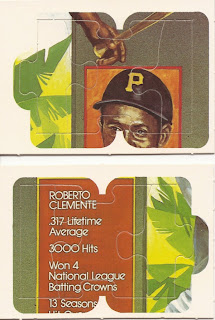