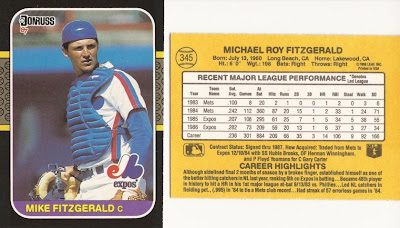 Mike Fitzgerald had a sore knee in 1985, but he played anyway. The result was, he didn't play that well, he hit .207. He also played a position for the Expos where knees are important - catcher.

"That's Mike's make-up," Expos Manager Buck Rodgers told The Palm Beach Post in February 1986. "He'd have been out there if he'd been traded for Joe Smoltz or Gary Carter. He's just a gung-ho guy who's going to do whatever it takes to stay in the lineup."

Fitzgerald also came in my third 1987 Donruss Christmas pack. He's also representative of a phenomenon I saw in one of the other two 1987 Donruss packs - doubles in the same pack.

But this pack was worse. Not only were there two Fitzgeralds in the pack. There were also two Ruben Sierras. For these pack posts, I usually run quick searches on the players, then pick out the most interesting ones.

I think for these Donruss packs, I'll institute a new rule, if there's a double in the pack, I've got to find something interesting about the guy because he's in the post. Sierra's down below.

Fitzgerald went on to play in a total of 10 major league seasons, staying with the Expos through 1991. The catcher he was traded for would go on to Cooperstown. 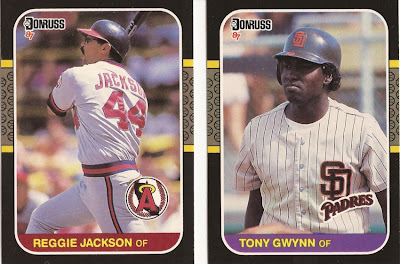 I actually got Carter in my second pack. As for other Hall of Famers, this third 1987 Donruss pack had three, including these two, Tony Gwynn and Reggie Jackson. 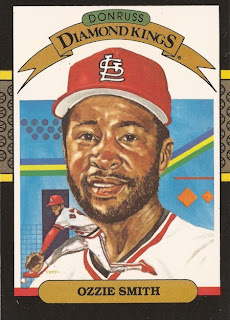 The third Hall of Famer was Ozzie Smith. His card was also the first Diamond King I've received in these packs. Smith "has become the premier defensive shortstop of the era," the card back reads. 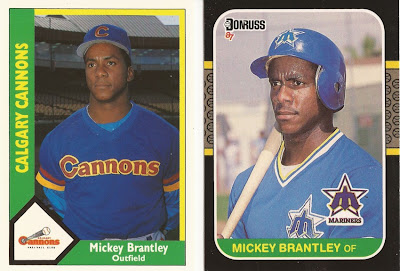 There was also one CMC set member in the pack: Mickey Brantley. This is actually the second time I've mentioned Brantley in two days. His son Michael came in my 2010 Topps New Year's pack. I covered Brantley back in September. 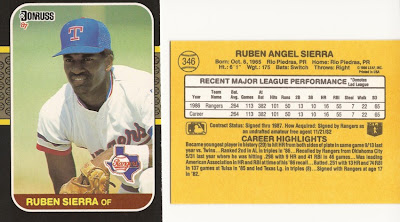 Sierra here actually fits in well with 1987 Donruss, the year Donruss had the Roberto Clemente puzzle. Sierra was often compared to Clemente, especially early on.

Sierra, a native of Clemente's Puerto Rico, even knew the Clemente family growing up. 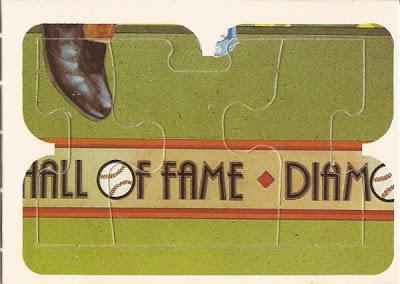