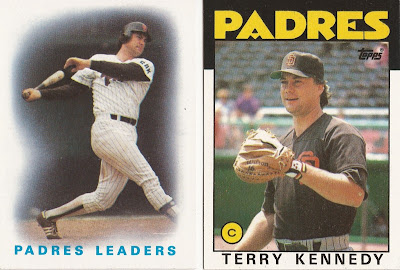 Terry Kennedy had a plan to make the majors after his selection in the first round of the 1977 draft. He wanted to make St. Louis in two seasons, he told UPI.

Kennedy's Florida State baseball coach Woody Woodward told The UPI he thought he could do it sooner.

"There are a few clubs he could play for right now," Woodword told The UPI in June 1977, calling Kennedy unique. "Any first round draft choice can miss making the majors. There are so many breaks you need, and you have to be lucky. But Terry has all the tools to make it."

Kennedy made the majors in less than two years, making his debut for the Cardinals and he would go on to play 14 seasons in the majors.

His 1986 Topps card, included in my fourth Christmas pack, notes he got his first Topps card in the 1979 set.

Also included in the fourth 1986 Topps pack was the Padres Leaders card, with Kennedy on the front. Kennedy is identified on the back as the Dean of the Padres, with the team since December 1980. That's when the Cardinals sent him to San Diego in a multi-player deal that included CMC set members Bob Shirley and Steve Swisher.

But, also in the pack, were Hall members Rod Carew and Mike Schmidt. Carew's career was over by 1986, his final game of his 19 seasons coming with the end of the 1985 season. Schmidt still had some time left in 1986, retiring in May 1989. 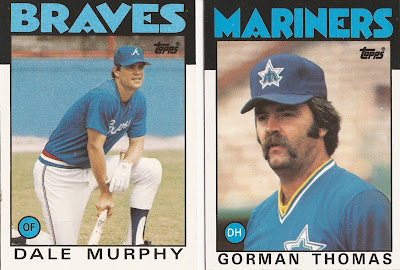 I'm including these two for the benefit of Larry over at Emerald City Diamond Gems. Larry is a Mariners fan and a Murphy fan. Actually, both the box bottoms on my Christmas 1986 Topps and 1987 Donruss boxes has a Murphy on the bottom. And I'm sure I could find some cool stories about Thomas there, but I don't think I have the time. 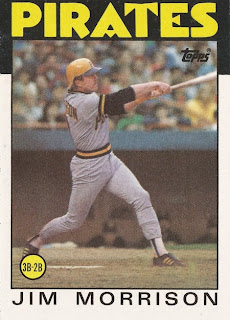 Elsewhere in the pack, there was Jim Morrison and Tim Burke. I'm highlighting Morrison because it gives me the opportunity to feature that very cool 1986 Pittsburgh Press article from handwriting examiner Louis Ciancio.

Morrison was among the Pirates analyzed. His signature showed him as a shrewd man, Ciancio told The Press.

"This man is always one step ahead of everybody else," Ciancio told The Press of Morrison. "He plans things, he's always planning ahead." 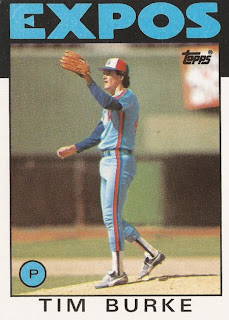 I started this post with the start of someone's career, I'll end it with the end of another player's career. Tim Burke pitched his last game of his eight-season career in September 1992. But it wasn't because he couldn't pitch anymore.

It was because his family needed him more, he told The Los Angeles Times in March 1993. Burke and his wife were the parents of four adopted children, each adopted from overseas and each with their own physical problems.