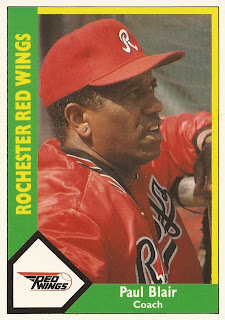 "I still enjoy working with the kids. That's helping me get through the year," Blair, then Coppin State's head coach, told The Sun in the midst of his first season, a losing season. "Everything I've gotten is through baseball. If I can help and send some kids to the big leagues, that can be my way of giving back."

Blair was continuing a career in baseball that began more than three decades earlier when he broke into the majors as a player with the Orioles, soon becoming a star. His playing career concluded in 1980, ending with the Yankees and the Reds.

He retired from playing and went into coaching. Blair signed as a roving minor league instructor and a scout in spring 1980, though he did return to play 12 games for the Yankees that year.

Blair also coached in high school and ran a baseball camp, The Associated Press wrote. He then earned his first college coaching position, named the Fordham head baseball coach in 1982. He went 14-19 that year before moving on to the Astros system as an outfield instructor.

By 1987, Blair was coaching in the short-lived Empire State Baseball League. In 1989, he was back playing, in the Senior Professional Baseball Association. He rejoined the Baltimore system briefly in 1990, serving as a coach at AAA Rochester.

After time off playing golf, bowling and enjoying retirement, Blair signed on with Coppin State. It was his bowling time that The Sun credited with helping Blair get the job. He was friends with the university's bowling coach and his name was in consideration when the job opened up.

"We're very pleased to have Paul join the Coppin family," Coppin athletic director Fang Mitchell told The Sun upon hiring Blair in 1997. "His outstanding career as a player speaks for itself, and he brings a wealth of knowledge and experience."

He also took the Coppin State job long after giving up on making the majors as a coach.

"I gave up on that 10 years ago," Blair told The Sun in 1998. "When people will not return a phone call or answer a letter, you know you have no shot."

Blair's time at Coppin lasted into 2002, when his contract wasn't renewed. He couldn't overcome scholarship and recruiting woes, compiling an overall record of 30-185 over five seasons, The Sun wrote.

In 2010, he returned to playing again, if briefly, taking part in the 2010 Hall of Fame Father's Day Legends Game.

On Dec. 26, 2013, Blair passed away at the age of 69. After his passing, former Blair teammate on the Orioles Ken Singleton recalled to The Baltimore Sun Blair's time as a player, his presence on the field and in the batter's box.

"Whenever a ball was hit and I would turn to follow the flight of the ball, Paul was already gone," Singleton told The Sun. "He never had a wasted step. He was smooth as silk and made all the plays in center field. They don't hand out Gold Gloves for nothing. And when you have eight of them, there is a reason."