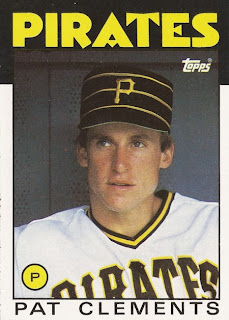 Pat Clements here is someone who has strong ties to his family and likes to please them. Those ties also give him a lot of security.

It came from an analysis of Clements' autograph.

"He hasn't quite relaxed yet," Louis Ciancio told The Press after analyzing Clements' autograph. "He's tight. He's doing very well (emotionally) but has a lot more ability than he realizes and it's going to take a little while to come into his own."

Clements went on to have some time in the majors each year through 1992. His 1986 Topps card came in the first pack opened from Christmas. This was actually the first pack of 1986 Topps I've ever opened. I started collecting the next year, opening my share of 1987 Topps.

This pack came with three Hall of Famers and one possible soon-to be Hall of Famer. Also, four years before the CMC set came around, there were two future CMC set members. 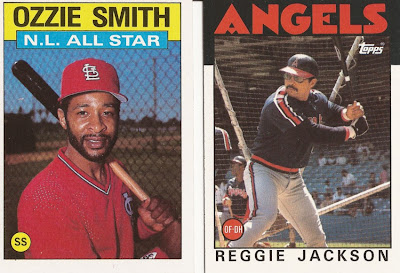 Here's Ozzie Smith's All Star card and Reggie Jackson's regular issue card. Jackson was in his next-to-last season in 1986, making the playoffs with the Angels. That career left no room for anything other than his career stats on the back.

Smith was in the midpoint of his 19-season career. 1985 marked his fifth All-Star appearance of 15 total in his career. Smith's card back includes the National League stolen base leaders list, topped by Smith's teammate Vince Coleman with 110. It also includes information on his July 10, 1985 game, where he hit a single and a home run and his home run to give the Cardinals the NLCS win Oct. 14. 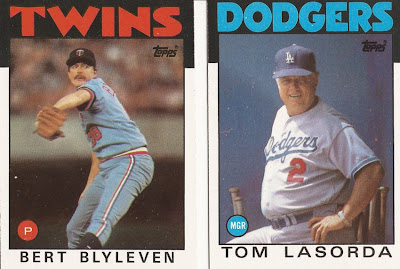 Bert Blyleven is the possible soon-to-be Hall of Famer. Blyleven earned his first major league win on June 5, 1970, his card back reads. His card back also includes 2,875 of his 3,701 career strike outs. Blyleven came just short in the 2010 Hall balloting.

Tommy Lasorda made the Hall of Fame in 1997. He's also cool because he is the most famous former member of the Schenectady Blue Jays, the old Phillies farm team in the original Can-Am League. 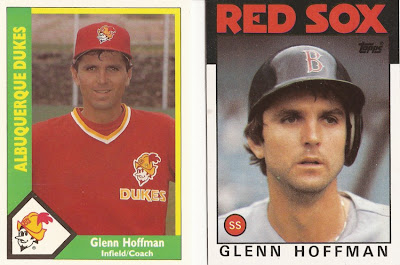 Of the two CMC set members, this is the one that I didn't recognize. Probably because I haven't covered him yet. Glenn Hoffman was in the seventh season of his nine-season career in 1986. He also had his shortest run that year, 12 games for the Red Sox.

Hoffman has a "Talkin' Baseball" blurb on the back. Milt Gaston and Alex Gaston were the first brother battery for the Red Sox, the blurb reads. It happened in 1929. 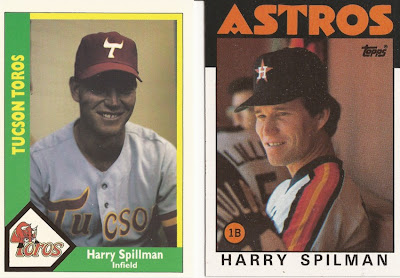 Harry Spilman I covered back in June. Turns out he was instrumental in getting Manny Ramirez through his first year in the minors. Spilman also came in one of my 1981 Fleer packs I picked up back in October. 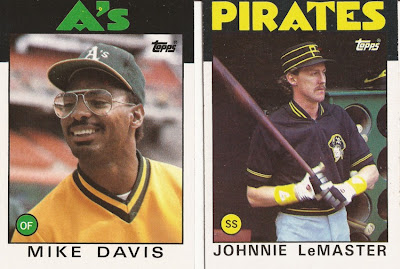 These two guys are known for a walk and a home run. Davis, according to his Wikipedia page, "is most remembered" for getting a walk ahead of Kirk Gibson in the ninth inning of Game 1 of the 1988 World Series.

In 1975, LeMaster became the 43rd player to hit a home run on his first major league at bat. But it wasn't a regular home run, this was an inside-the-park home run.