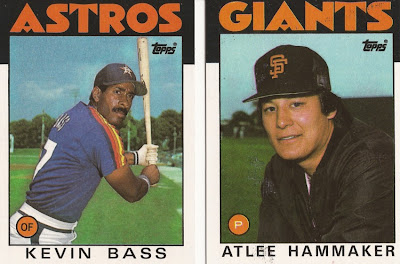 Kevin Bass spent two months in the disabled list after breaking his leg in 1989, but he tried to put that time to good use - by lifting weights.

When he returned, he hit a grand slam to help his Astros over the Cubs by a score of 8-4.

"I lifted weights during the time off and it has made me feel a lot stronger," Bass told The Associated Press after that August game. "I am hitting balls that I haven't been able to hit in years."

Bass was actually credited with two home runs that day one in the third and the grand slam, the game winner, in the bottom of the ninth.

That game came three years after Bass' 1986 card came out. According to the back of Bass' 1986 Topps card, the first Astro to hit two home runs in a single inning was Lee May, who did it against those same Cubs April 29, 1974 in the sixth inning.

Atlee Hammaker had his own exercise routine. Hammaker was in the midst of a 10-9 season, but one where he posted a league-leading ERA of 2.25 in 1983. Sports Illustrated credited Hammaker's exercise regime for his success.

"Say you get yourself a Ferrari but it's not working quite right," Hammaker's trainer Gary Iacini told Sports Illustrated that July. "You put in new plugs and maybe a new transmission. That's the way we, Atlee and I, looked at his body—as a machine. We improved the parts, so now the machine is working fine. What you need next is a good driver. We've got one. Atlee now drives his own body."
Hammaker and Bass came in my second 1986 Topps Christmas pack. These two boxes I received, the 1986 Topps and 1987 Donruss boxes, are cool in that together they're two gifts. But individually, they're more like 72 separate gifts. This is the third overall that I've opened, 69 more gifts to go. 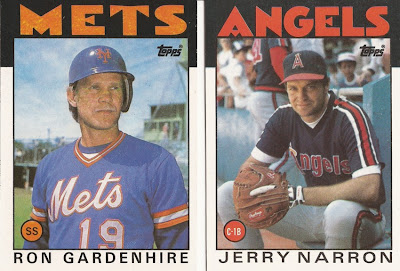 As for the regular categories of players I'm looking for, there were no Hall of Famers in the pack. There were also no CMC members. There were, however, two future major league managers, Ron Gardenhire and Jerry Narron. One of the future managers. Gardenhire, managed CMC members early on in his career at AA Orlando.

Gardenhire spent parts of five seasons in the majors as a player, all with the Mets. He was in his third year managing in the minors in 1990, helming the Twins' AA team in Orlando. He also oversaw the Orlando members of the CMC set.

Gardenhire, of course, would go on to manage the Twins in Minnesota, going into his 10th season there in 2011. Narron is not currently managing in the majors, but he managed five seasons there, three with the Reds and two with the Rangers. Narron's managerial career came after parts of eight seasons spent in the majors as a player. 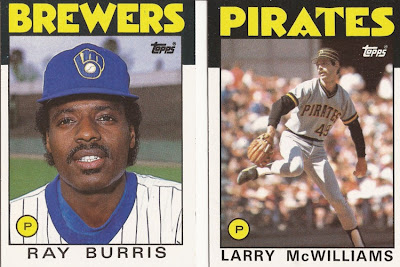 In the playoffs that year, also his only personal trip to the post season, Burris lost a game in the division series to Philadelphia but won Game 2 of the NLCS with a complete game shutout. Burris told reporters later he couldn't remember the last time he pitched that well.

Burris pitched well again in the deciding Game 5, eight innings and one run, but it wasn't enough to beat the Dodgers. The Expos and Burris didn't return to the post season again.

McWilliams' day came in 1978 as a rookie for Atlanta. McWilliams started the game that stopped Rose's streak. He walked Rose, stabbed a liner for an out and got Rose to ground out, according to The AP account of the Aug. 1, 1978 contest.

Rose was so impressed, he didn't even recognize McWilliams later, according to The AP account. But Rose said he would recognize the young hurler by the rotation on his pitch. When told McWilliams was sitting next to him, Rose slapped the table and turned to the hurler.

"Why did you catch that ball?" Rose asked, according to The AP account.