Just following up on last night's post on Kelly Heath. I wanted to acknowledge that Heath's card was one of the inspirations for this blog way back when. 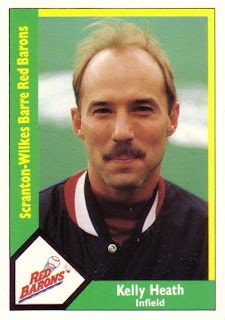 When I was opening packs of CMC last fall, gifts from my wife for my birthday and Christmas, I ran through the players seeing what happened to them. When I ran Heath, I realized he had gotten to the majors, but only for a single game in 1982, eight years before his CMC card came out.

It was fascinating and made me wonder how many other players in the set were like him and, really, what happened to each of them.

I had actually thought about making him one of the first posts for that very reason. But I'm glad I waited until the randomizer picked him. I have more research methods at my disposal now. I was a little disappointed that I couldn't find a good linkable quote from Heath about his brief major league playing career.

But I think I found enough. And the play-by-play of his only appearance was pretty compelling by itself with his single at bat and coming two batters away from a second one.