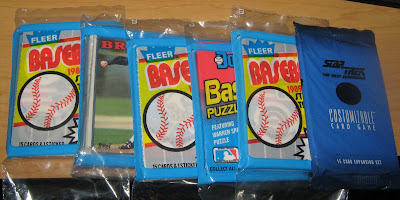 So I got the Chia Hillary going Sunday. I thought about trying to give her some Chia eyebrows, but thought better of it. Anyway, we went grocery shopping Sunday, as well, and I suggested we stop by the Dollar Tree to pick up some birthday cards. Yes, birthday baseball cards.

That's what I got up there. Five cheap of the cheapest repacks and an unopened pack of Star Trek The Next Generation Customizable Card Game.

I say these are the cheapest of the cheapest repacks because that's what they are. They're literally unopened packs, wrapped in plastic and sold for a buck.

We got into the Dollar Tree, my wife went to look for something and I stood at the card display. The display was right next to the register and I had to tell several people that, no, I wasn't in line.

In doing so, I kind of felt like a pack searcher, but the front window on the plastic is designed as a large window, showing what pack is inside. So I assured myself that I wasn't a searcher.

There were other packs, like 1989 Score, 1990 Upper Deck, and 1990 and 1991 Fleer, but the 1989 Fleer was the most interesting. It also came with the highest potential reward, namely the famous Billy Ripken card.

I picked up the 1989 Donruss pack because I hadn't opened one of those up since 1989. I'm not sure why I picked up the actual 1988 Topps repack. Maybe just because it was different and not an actual pack.

I have the recounting of the first pack all done up for tomorrow afternoon. It's the Star Trek pack. By the way, if anyone is ever doing a group break of the Star Trek game cards, sign me up for the London Kings.
Posted by Steve78 at 1:00 PM