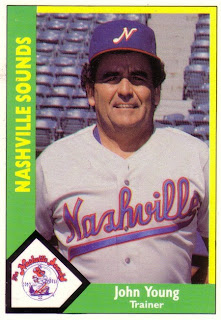 Going into 2002, John Young had been a trainer in professional baseball for just under a quarter century, according to the Louisville Bats media guide.

In 2002, his 25th year as a trainer, he would return to the All Star Game, this one the AAA All Star game, representing his AAA Louisville Bats.

Young started his career as a trainer in 1970, serving as head trainer for St. Joseph's College and as assistant trainer for the Philadelphia 76ers, according to the media guide. He has a masters degree in athletic training from Indiana, his card reads.

He started his work in baseball in 1978, becoming trainer for the Indianapolis Indians for a two-year stint starting in 1980. He later returned to the Indians in 1993, serving there through 1999, according to the 2002 guide.

It was in the 1980s that he served as trainer in the California and Southern leagues. His 1990 season with the Nashville Sounds was his sixth overall with the club, according to his CMC card.