(Note: This is the first of two players on this card, Edgar Martinez. The photo and the stats on the back belong to Tino Martinez. Tino's feature is here: Tino Martinez, Quality Player) 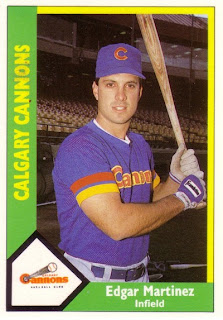 Edgar Martinez had already had one home run on the night, a three-run shot in the third that cut down a five-run deficit. Now, Martinez was up in the eighth, his Mariners now tied with the Yankees 6-6 in Game 4 of the 1995 ALDS. The bases were loaded.

Martinez promptly hit a grand slam, keeping his Mariners alive for another night and helping them on their way to their first ALCS.

"I've had dreams of being the hero in the big game, yes," Edgar Martinez politely told reporters afterward. "I was very happy."

Martinez began his career in 1982, signed by the Mariners as a free agent out of his native Puerto Rico. His first professional year was 1983, at short-season Bellingham, his .173 average no indication of things to come.

He picked things up at single-A Wausau, hitting .303. He made AA Chattanooga and got a taste of AAA Calgary in 1985. He hit Calgary for good in 1987, flashing a .329 batting average and earning his September call-up to Seattle.

Martinez wouldn't make Seattle for good until 1990. That year, he hit .302, spending the entire year in the majors playing third base. He repeated that hitting feat in 1991, hitting .307. In 1992, Martinez was even better.

And he won a batting title.

That August, he spoke to the Associated Press about that very possibility. Martinez told the reporter he tried not to think about it.

"When you're in a groove, even when you sometimes don't hit the ball well, you get a base hit," Martinez told The AP. "This year, I've moved my level of play a little bit higher. I'm doing a little bit more now."

Martinez made the All Star team that year, something he would do six more times in his career. As for the batting title, Martinez would do that again, too, in 1995 with a .356 average.

The year of that second batting title was also the year Martinez made the transition from the Mariners' third baseman to the team's full-time designated hitter.

It was as the Mariners' DH that Martinez slugged that grand slam in Game 4 of the ALDS. The next night he did it again, this time am 11th-inning, two-run double that sent the Mariners celebrating to the ALCS.

"Best hitter in baseball," the Yankees' Reggie Jackson told The New York Times after the Game 5 win. "People are only starting to realize just how good he is."

By 2001, after other teammates left for elsewhere, Martinez was the one who stayed, The Los Angeles Times wrote that July.

"Edgar is," Seattle pitcher Norm Charlton told The LA Times, "simply an amazing hitter and an absolute professional. He studies every pitcher. He is prepared every game. He is the best example of what a major league baseball player should be."

Martinez finally hung up his batting gloves in 2004, taking with him the title of "one of baseball's greatest designated hitters."

''Obviously it's very hard,'' Martinez told reporters after his decision to retire. ''As a player, I feel in my mind and my heart that I want to keep playing, but my body's saying something different.''

Quickly, others were saying other things about Martinez. That he should be in Cooperstown. Martinez was eligible for the Hall of Fame for the first time this past year. He garnered a healthy 36.2 percent of the vote.

Speaking to MLB.com last November about the big question in Martinez' candidacy, his time at DH, former Mariners manager John McLaren said he didn't think that would be a real issue.