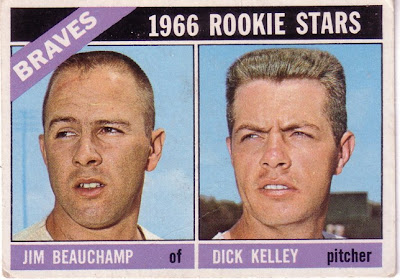 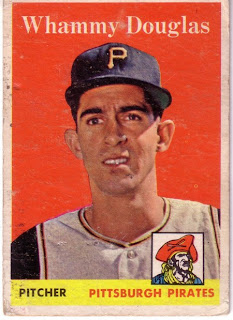 I'll get to my quarter box finds from the Cooperstown trip later, but for now, here are some quick vintage finds. There were a couple big boxes of 50s and 60s cards.

I knew there had to be some future CMC alums there. A handful of the coaches in the set were former players who played back then. I know a few of the names, but I kept thinking I was blowing past cards that I was looking for. I really should get a comprehensive list of CMC set members with cards from that era.

Having said that, I did finally find two cards with coaches from the CMC set. The first is that card up top, the 1966 Topps Rookie Stars card of Jim Beauchamp and Dick Kelley. Beauchamp is the guy I'm going for here.

Beauchamp played in parts of 10 seasons in the majors. He also went on to be a minor league manager, starting in 1975 at Columbus, Ga. In 1990, Beauchamp served as manager of the Richmond Braves, earning him a slot on the CMC set.

Beauchamp's card mate Kelley had a little shorter career, parts of seven seasons. Five of those were with the Braves, two with the Padres. 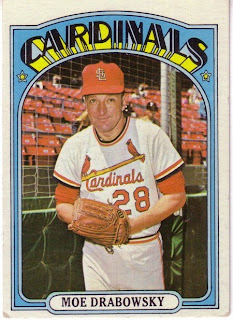 The other future CMC alum I picked up was Moe Drabowsky. Drabowsky had a 17-year career in the majors. This card was one of his last as a player. His final year as a pitcher was that year. In 1990, Drabowski served as pitching coach for the Vancouver Canadians, earning his spot in the CMC set.

Also, according his CMC card, Drabowsky was born in Poland. Without looking it up, I'd venture to guess he is the only Poland-born member of the set.

Both were 1958 Topps cards. The interesting name was Whammy Douglas, pitcher for the Pittsburgh Pirates. That's him up top. The back of his card notes that he had never had a losing season in the major leagues or the minors. 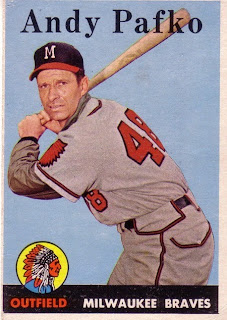 His major league stats show a 3-3 record. According to Baseball Reference, he never would have a losing in the majors. He also never would return to the majors. He spent 1958 in the minors, going 16-10 at AAA Columbus. He got his losing season in 1959, going 2-5 between AA Nashville and AAA Havana. Three more seasons and he was done.

The last card from the vintage box was of Andy Pafko. Here, he's with the Milwaukee Braves. But we were introduced to Pafko in 2006, at Wrigley Field. Not literally introduced, but introduced as in he was there, throwing out the first pitch and singing Take Me Out to the Ballgame. 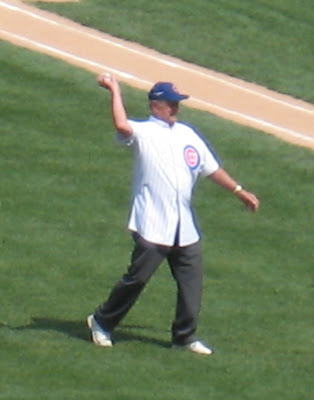 Andy Pafko throwing out the first pitch at Wrigley, June 17, 2006 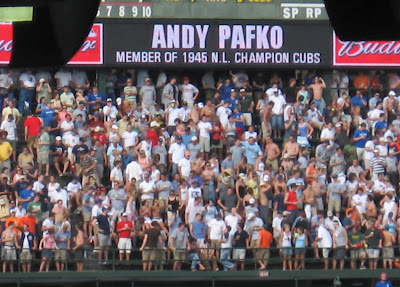 Pafko's name displayed during the Seventh Inning Stretch
Posted by Steve78 at 1:00 PM