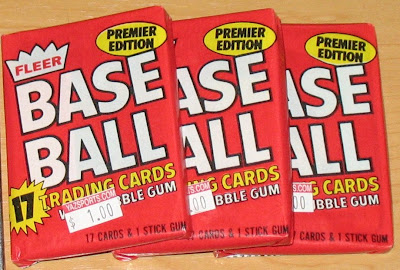 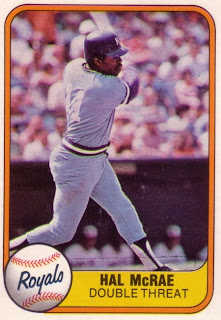 I just opened the first of my recent Cooperstown pack haul, one of the three 1981 Fleer packs I got for a buck each. I didn't get exactly what I was looking for, but I got enough to be pleased.

This was definately the oldest pack I've opened. The previous record was held by a 1984 Topps pack I opened from our last trip to Cooperstown. And I can't see that record being broken. Older packs are just too scarce or expensive to rip.

In opening these packs, the normal criterea apply. First, I'm looking for direct members of the 1990 CMC set. A quick scan through the 1981 Fleer checklist shows a few of those, not many, but they're there. Second, I'm looking for derivitive CMC players, those players with connections to CMC set members. I actually found two of those I'll get to shortly. Then I'm looking for Hall of Famers and just anyone else that might be interesting.

The obvious CMC connection, at least to me, is Hal McRae, listed on the back of his 1981 Fleer card as an outfielder and designated hitter. On the front, for brevity's sake, his position is simply listed as "double threat." McRae's son is Brian McRae, member of the CMC set. 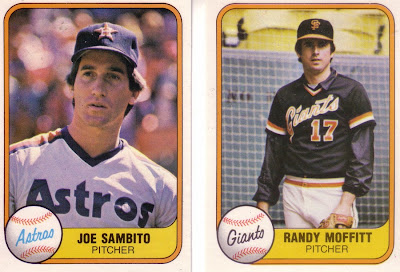 The other CMC connection is a little more subtle. But, thanks to Baseball-Reference's Bullpen, it's there. It's Joe Sambito, pitcher for the Astros. Sambito pitched for part of 11 seasons in the majors. He later became an agent. Among his clients? CMC set member Ryan Klesko.

Also according to Baseball-Reference's Bullpen, that guy next to Sambito, Randy Moffitt, he's the brother of Billie Jean King. 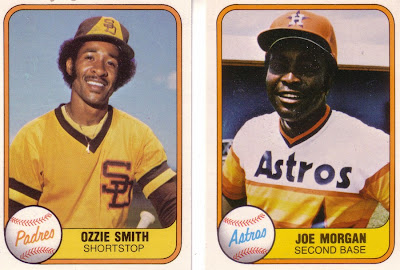 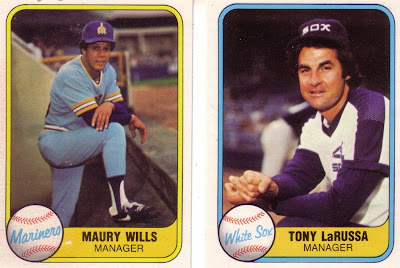 Then there were two managers, Fleer had manager cards back in the day. There was Maury Wills, manager of the Mariners. The back notes that Wills spent a decade in the minors before making it to the majors. Once there, he swiped 104 bases and the NL MVP award. There was also Tony LaRussa, manager of the White Sox and current Cardinals manager. The back notes LaRussa's managerial debut was as Knoxville Skipper in 1978. Skipper is capitalized on the card. 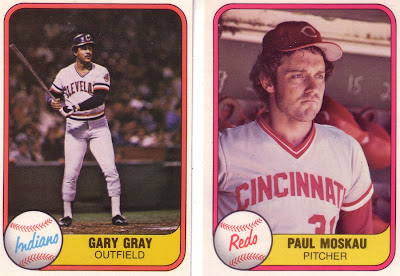 These two were just interesting names. There was Gary Gray, who played in parts of six seasons for three clubs. That's Gary Gray, not Gary Gary. Then there's Paul Moskau. My only previous acquaintance with Moskau was in March, when the 1980 Topps blog and Night Owl posted about him on the same day. Now it's my turn.