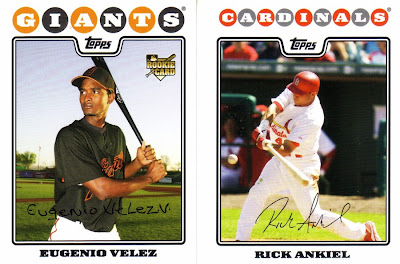 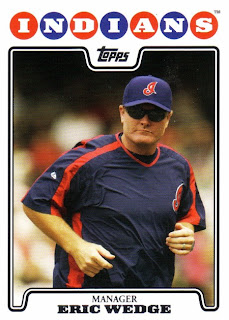 I didn't mention these in my Vacation 2010 Rundown, but they kind of fit. I picked up this 2008 Topps Series 1 bonus box off Amazon and it arrived in the mail while we were out.

My wife ordered something off the site and needed a few extra dollars to get the free shipping. I've picked up this box before. It's a cheap addition to any order.

The main reason to put this post here is that I busted open the box right after we got home. There wasn't really a reason. I wasn't really that interested in 2008 Topps. And I also still have those six Super Jumbo Packs that I got for a buck each still to open.

So I busted through all five packs, plus the extra special five-card extra pack and there were a few interesting entries.

Related to this blog, the coolest card I got was the Eric Wedge Indians manager card. Wedge is an actual bona fide member of the 1990 CMC set, one of a hand full that have gone on to be major league managers. The back of the card notes that Wedge became the youngest manager in 18 years when he became manager in 2003. The back also notes that the Indians tied for the best record in baseball in 2007. It doesn't mention that they were one win away from the World Series and couldn't get that final win. Wedge's write-up is yet to come.

Wedge also got a quote on the back of another card, Ryan Garko's. "He's a grinder," Topps quoted Wedge as saying of Garko. "He gets in there and battles, and doesn't give in." And on Casey Blake's card back, Wedge called Blake "a fantastic all-around ballplayer."

Another direct CMC member is quoted on the back of Johan Santana's card, Curt Schilling. "I look at (Santana) like I looked at (Randy Johnson) a few years ago," Topps quoted Schilling as saying. "There's him, and then there's everybody else."

Two other cards stood out as players I have referenced in write-ups about CMC members: Rick Ankiel and Eugenio Velez.

Set member Mark Riggins, a pitching coach with the Cardinals, helped Ankiel get back to the majors before Ankiel's switch to the outfield. Then there was Velez, who was helped along by Fresno hitting coach and CMC set member Jim Bowie. Bowie's advice was to just keep swinging the bat. Reader Jason of Clyde's Stale Cards noted Velez later got sent back down because he swung too much.

Elsewhere in the packs was Mike Piazza in an Athletics uniform. It was his final base card, his last year being 2007. Will Piazza's Cooperstown cap be a Dodgers cap, a Mets cap or an Athletics cap? Then there was the Prince Fielder Own the Game card then Hunter Pence's gold cup card. Pence I've always found cool because he played for our local NY-Penn League team the Tri-City Valley Cats, and he's helped the fantasy team in the past. I can't say I saw him play locally, that was a few years ago, but it's cool that he was here.

As far as the card backs go, I enjoyed the Jacque Jones write-up, about how prepared Jones was: "Prior to the locker room celebration when the Cubs clinched the NL Central," Topps wrote, "he donned green swimming goggles."