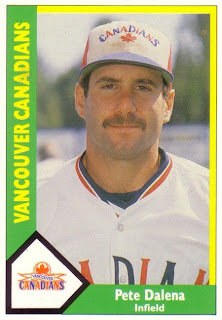 It was the top of the ninth, the Indians were down 5-2. Cleveland needed a rally this day, July 17, 1989, and Pete Dalena, put in as a pinch-hitter, did his best to get one started.

With Jeff Reardon on the mound and one out, and on a no-ball, one-strike count, Dalena hit one to right field for a double.

The rally, however, was almost over before it began. Reardon set down the next two batters, locking down the Minnesota win.

Dalena was originally signed by the Yankees, drafted in the 27th round of the 1982 draft out of Fresno State. The Yankees selected him after gaining All American honors in 1981 as a designated hitter.

Dalena stayed with the Yankees system at AAA through 1988, but he never got the call-up to the Bronx. Granted free agency, Dalena signed for 1989 with the Indians, finally getting his call to the bigs in July.

One more year at AAA with the White Sox and the Twins systems and Dalena's playing days were done.

More recently, Dalena serves as the head baseball coach at San Joaquin Memorial in his hometown of Fresno. His team moved on in 2006 sectionals, with the help of a Dalena-called suicide squeeze, according to The Bakersfield Californian.

Dalena told The Californian he called for the squeeze after seeing the opposing pitcher. After the squeeze, Dalena's hitters woke up, winning 15-6

"I figured we were in for a barnburner when I saw the stuff he had warming up," Dalena told The Californian. "That was the best display of hitting I've seen against that type of pitcher. I'm glad we hit the way we did. That team never stopped playing."