Pankovits and Valley Cats One Win Away 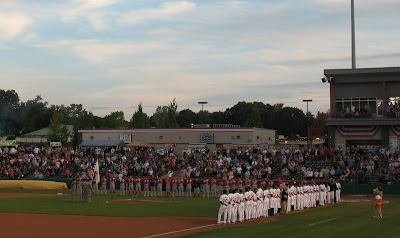 Before the National Anthem at Bruno Stadium in Troy, NY 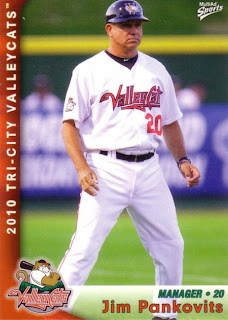 In his interview with The Greatest 21 Days in July, Pankovits called that year and playoff run obviously the highlight of his career. Now his team is making another playoff run and they're one game away from the league championship.

My wife and I got to go to Game 1 of the NYPL Championship last night at the Valley Cats' home in Troy, NY, and we got to see the Astros affiliate Valley Cats triumph over the Mets affiliate Cyclones by a score of 5 to 2.

The only other Valley Cats game we got to earlier in the year was against the same Cyclones and the Valley Cats got blown out. It looked like this game might have the same result. The Cyclones jumped on top quickly, with a two-run home run in the first.

But they were the only runs the Cyclones would get. The Valley Cats got four in the third and a solo-home run later to take the game. The Valley Cats' account: 'Cats one win away from title 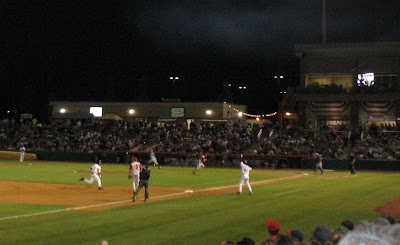 Pankovits, serving as third-base coach, sends a runner in the third

It was a chilly September night, so we obviously each enjoyed double-scoop ice cream and then got some kettle corn to warm it back up again. I also ducked into the souviner shop and picked up a Valley Cats team set, that's where that new Pankovits card is from. After the game, they had a good fireworks show. (Video of final out and fireworks is below)

I often use fireworks shows to convince the wife to go to particular games here or elsewhere. She loves fireworks. But, she also said the charm is almost over. Thankfully, the season is almost over, as well. I'm sure the charm will be recharged by April.

And, thanks to the Valley Cats' win, going up one game to none, these fireworks seemed extra fitting.

The Valley Cats got here after beating the Batavia Muckdogs 2 games to 1 in another matchup that had past implications, at least for this blog. Both managers, Pankovits and Batavia's Dann Bilardello were members of the CMC set, as was Batavia's hitting coach Roger LaFrancois. I was able to interview all three this past season. 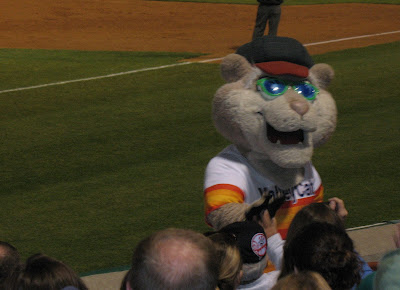 Back to that 1986 matchup between Pankovits and Backman, the one Backman's Mets won 4 games to 2, that Game 6 the epic 16-inning affair at the Astrodome. Backman got into that game as a pinch-hitter in the ninth, going 1 for 2 in four plate appearances, getting an RBI in the 14th and scoring in the 16th.

Pankovits' contribution was more modest, coming in as a pinch hitter in the 13th for the Astros, grounding out.

Now, tonight in Brooklyn,(Edit: Monday night, Sunday's game was rained out) the Valley Cats are on their own playoff run, going for their first championship, up one game to none in the three-game series.

The video of the final out and fireworks below. This is the direct link to the video: http://www.youtube.com/watch?v=jSFFCoDWdM4