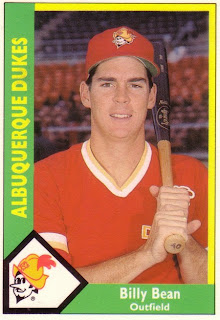 Billy Bean arrived in Detroit from AAA and was immediately in the lineup, going 4 for 6 and scoring two runs. But it wasn't Bean's showing at the plate that had Tigers manager Sparky Anderson excited.

"What's the best thing that Bean did?" Anderson asked reporters afterward, according to The Associated Press. "I'll tell you. He backed up third base on a throw from right field. You haven't seen a left fielder do that on this team in five years. Five years, I'm telling you!"

Bean made headlines early on, penciled in as the Tigers' outfielder of the future. He played 26 games for the division winning Tigers that year. He would go on to play in parts of six seasons. His most playing time came in 1993 and 1994, after three seasons out of the majors.

But, perhaps what Bean is most remembered for came years after his playing days, when he announced that he was gay.

Bean made the majors that year in 1987 only a season after he was drafted by the Tigers out of Loyola Marymount University. Bean played 1986 at AA Glens Falls, moving up to AAA Toledo for 1987.

Bean got the call to Detroit that April, his Toledo manager breaking the news.

"I had no idea what was going on," Bean told The Los Angeles Times. "He had this big smile on his face. When he first told me I was going up, I was sure he was kidding."

Bean hit .258 in those 26 games with Detroit in 1987. But he never caught on with regularity. By 1989, Bean was traded to the Dodgers and saw his most playing time to date, 51 games with Los Angeles.

Then he was away from the majors for three years, including a stint in Japan in 1992. He returned with the Padres for 1993, playing in 88 games.

Speaking to the Times after his return in 1993, Bean looked back on that first year in 1987, thinking he was brought along too quickly.

"I was rushed to the major leagues and never got a chance to (learn to) fail," Bean told The Times. "I was overwhelmed when I went a couple games without a hit.

"When I got sent down, I struggled because of my head. Every day was like, 'What did I do wrong?'" he told The Times. "I put too much pressure on myself. The Tigers gave me an opportunity, but they didn't give me a chance."

About his return to the majors, Bean told The Times he was glad to be back.

"I definitely felt time slipping away," Bean told the paper. "I'm going to be 29. That's young in the big leagues, but in the minor leagues, that's an old man. I knew it was up to me to get here and no one else."

It was in 1999 that he shocked many in an interview with The New York Times, becoming only the second former major leaguer to acknowledge later he was gay.

Bean told The NY Times he started thinking about coming out when he heard his college teammate and friend Tim Layana died in a car accident. But he didn't hear about it until later, missing the funeral. Bean had withdrawn from college and professional baseball friends, The NY Times wrote, because he didn't want to continue lying about his sexuality.

''I missed the funeral of my college roommate, one of my best friends,'' Bean told The NY Times. ''Tim would have understood if I had told him. I began to think, I'm not living some horrible existence, I'm proud of my life. Where do I finally draw the line and just say, 'Accept me or don't?' ''