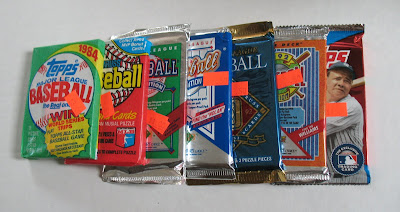 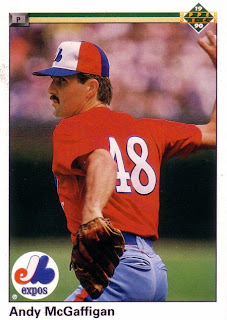 I actually went through and opened all the packs and took a look. Once I opened a couple, I had to open the rest. So I'll do all the Upper Deck packs here. These are the packs that I picked up in Cooperstown on induction weekend.

The 1990 pack came with just one CMC set member, Andy McGaffigan. McGaffigan had already played in parts of nine major league seasons by the time 1990 came around. He'd signed that spring with the Royals. He played 10 games at Omaha that year, spending the rest of the year back in the majors. Other highlights of the pack: Albert "Don't Call Me Joey" Belle appearing as Joey, a thinner Barry Bonds and brief Orioles skipper Juan Samuel.

There was also Geno Petralli, who two years later would be involved in a scuffle with Scott Chiamparino in an April fools joke gone bad.

The 1991 pack was a little more successful, with a couple CMC set members: Jimmy Kremers and Kevin Maas. I remember Maas bursting onto the card collecting scene that year with a few good weeks. Kremers was one of my earlier reviews, Maas I've yet to get to. There was also a Charlie Hayes. Hayes would be traded the next off-season for CMC set member Darrin Chapin. 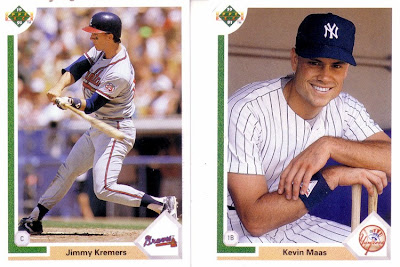 Elsewhere in the pack was Fernando Valenzuela, all three of them, the triple exposure. There was also Ken Griffey Sr. with Junior sneeking into the picture. The photo on the back of the Valenzuela card has him signing a Sports Illustrated cover of himself. So I guess that's an extra Valenzuela, five on the card.