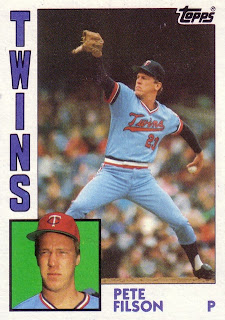 Wrapping up those Cooperstown packs I picked up after the Andre Dawson induction a few weeks ago, I have today the results of the 1992 Donruss pack, and two Topps packs produced 26 years apart, 1984 and 2010. As you might recall, the goal of the packs was to find a Dawson, then 1990 CMC set members and then, because I got them in Cooperstown, Hall of Famers.

The 1984 Topps pack was the first I have opened. I vaguely recall getting a pack in 1984 when I was five. I'm not sure why whoever got it for me did, but I didn't get another until 1987, my first year as a full-fledged baseball fan. This pack was $3 at the store on Main Street.

As I recall, there are two Dawsons in the set, his regular card and his All-Star card. I got neither. But I did fulfill the other two goals with the pack, getting a 1990 CMC member and Hall of Famers.

The CMC member was the one I wasn't certain I would get. I knew there were a number of members who had been in the majors prior to 1990. I had also interviewed one, Dann Bilardello, who I knew was in the 1984 Topps set. But I figured the odds would be against me. Running through the cards that I got, I did get one: Pete Filson.

Filson was with the Twins in 1984, his third year in the majors. He got major league looks every year through 1987, the last with the Yankees. Then came two years hanging on in the minors, first with the Yankees and then with the Royals. In 1990, Filson started with AAA Omaha, getting him into the CMC set. Later that year, he got his last look at the majors in Kansas City. Filson is a player I have yet to review. 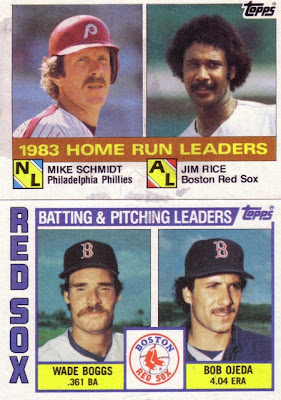 As far as Hall of Famers, I got four. There was the standard Tony Gwynn, then the Home Run Leaders with Mike Schmidt, Jim Rice and a pronounced gum stain. I also happens that I have a non-gum-stained leaders card, I picked up the same card a few months ago in a random grab bag. There was also the Red Sox checklist with Wade Boggs. I included scans of Jeff Leonard's card as his one flap is not yet down, and the Tom Burgmeier because the photo is an interesting choice for a pitcher. 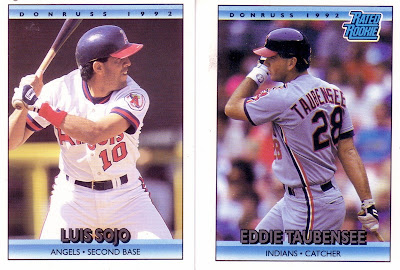 The 1992 Donruss pack understandibly produced the CMC player haul, with four. There was Eddie Taubensee, Indians Rated Rookie, Luis Sojo, Charles Nagy and Travis Fryman. But all were in the 1990 CMC set. Elsewhere in the pack, I picked up a Kevin Elster, that second Greg Myers, whom I also got in the 1992 Upper Deck set. 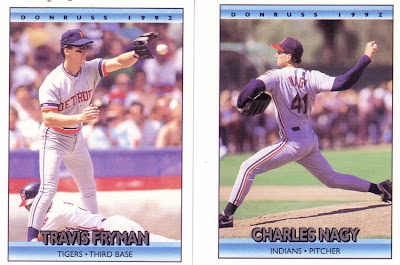 Regarding the CMC set members, I have yet to review any of the four. Taubensee, the Rated Rookie, had a decent career playing in parts of 11 major league seasons. Only one of those was with the Indians, he was with the Astros when his 1992 Donruss card came out.

Sojo, Fryman and Nagy also had decent careers. I recall Fryman being a hot card property in the collecting world back in the day. Sojo spent 13 seasons in the majors, Fryman spent the same time between the Tigers and the Indians. Nagy spent 14 years in the majors, 13 of those with the Indians. 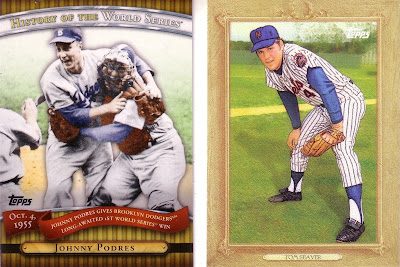 The last pack was one I purchased inside the Hall of Fame itself, a pack of 2010 Topps Series 2. The goal here was to get that Dawson Legendary Lineage. Because that would have been just cool to pull that in the Hall itself. I opened the pack while we waited to see Dawson's plaque placed on the wall. No Dawson. But I did get the Tom Seaver Turkey Red and the Johnny Podres History of the World Series. Podres, while not in the Hall is notable. But Seaver's plaque was right there in the Hall.
Posted by Steve78 at 1:51 PM