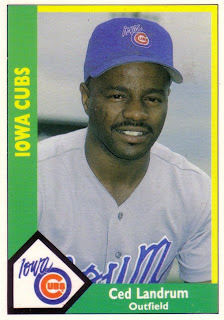 Put in as a pinch runner, Ced Landrum had already stolen a base and scored. He stayed in the game and now it was time for his first major league at-bat, May 28, 1991.

"I was really thinking about getting on base," Landrum told Steve Stone the next day on WGN's Leadoff Man, according to The Times Daily, of Florence, Ala. He wanted to bunt, but didn't get a chance. "With a lefty on the mound, I just tried to go the other way. He gave me one out up over the plate and I hit it."

It was a single in his first at-bat. Representing the tying run, Landrum soon stole a second base. He went to third on a groundout and was promptly stranded. But it was a hit and two stolen bases in his major league debut.

Landrum would get 25 more stolen bases that year for the Cubs in 56 games. He got caught only five times. But with a batting average at just .233 in those appearances, it was his only year with the Cubs and he would get only one more look, two years later with the Mets.

And he quickly showed his speed. At single-A Winston-Salem in 1987, Landrum swiped 79 bases while hitting .282, according to The Chicago Tribune. In 1990, at Iowa, Landrum stole 46.

By 1991, Landrum was getting a look, helped, Landrum believed, in that the Cubs' manager at Iowa in 1990 Jim Essian was now the manager of the big club. Called up by late-May, Landrum found himself in a fight for a Cubs center-field slot, according to The Tribune. Also in the competition was Doug Dascenzo and Jerome Walton.

"Each will have the opportunity before one of them steps to the forefront and claims the job," Essian told The Tribune. "Each is different. Dascenzo is a switch hitter, good bunter, strong on defense. Landrum has tremendous speed. Walton is the strongest hitter and has the strongest arm."

Essian spoke after Landrum's early success, which included his first at-bat and his seventh. In his seventh at-bat, Landrum hit a two-run single in the ninth to give the Cubs a 4-3 win.

But by September, Essian admitted he hadn't been able to play Landrum as much as he'd have liked to, The Tribune wrote. He targeted Landrum for right-handed pitching on turf. He also expected Landrum to work on his bunting and slap-hitting to take advantage of his speed. Landrum showed that speed again in the second-to-last game of the year, getting four steals.

Landrum played his final game for Chicago that October. In spring training, Landrum tore a groin muscle and, by July, the Cubs traded Landrum to the Brewers. He spent the remainder of the year still at AAA, but at Denver. Landrum signed with the Mets in May 1993, getting his second look at the majors in August.

In 22 games for the Mets in 1993, Landrum hit .263, getting five hits. But he also stole zero bases. He also didn't get an invite to spring training 1994, by anyone, according to the Arizona Daily Star.

He turned to unloading freight trucks for a living, The Daily Star wrote. Landrum soon got back into baseball, working as an instructor with the Expos. He is now a coach with the independent Joliet Jackhammers in Joliet, Ill.

Speaking to his hometown paper The Times Daily in 1997, Landrum looked back on his brief career. He felt as though he never got a legitimate shot.

"Maybe I didn't work as hard as I should have," Landrum told the paper, "but I always thought I had the ability to play."