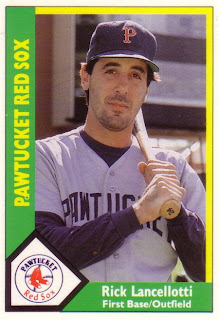 His playing career nearing its endpoint in 1992, Rick Lancellotti had received offers to coach in the minors, play in Mexico City and even play baseball in Italy.

He chose Italy, but not without much thought given to his young daughter and son, he told the New York Times that year.

"You wonder a lot of times, is it all worth it?" Lancellotti told The Times, noting his son sometimes would ask him to fly home for a day. "Then I wonder: Could I get this kind of a job back home? The answer is no. Things are tight back there."

"If I quit and go onto something else, am I going to be happy?" he added to The Times. "My biggest fear is someday I'll be behind a desk somewhere and I know I'll hate it. I know things won't match up to the way they were when I was playing ball. So, while I can do it, I'd better do it."

That was Lancellotti's last year playing professionally. And he isn't behind some desk somewhere today, though he might have an office. Today he runs Rick Lancellotti's Buffalo School of Baseball outside Buffalo.

It was in Buffalo that the Rhode Island native had some of his greatest success. In 1979, playing at with Pittsburgh's AA team at Buffalo's old War Memorial Stadium, Lancellotti belted an astonishing 41 home runs, three in one two-game stretch. Officials would later attribute Lancellotti's numbers to the park.

But Lancellotti was well on his way to his career 276 minor league home runs, once the minor league record. He'd broken the record not even knowing it, according to The Times.

Lancellotti's season in 1979 didn't earn him much. He returned to AA Buffalo, before a promotion to AAA Portland for 1980. That July, with Buffalo, Lancellotti hit home runs in both ends of a double header and the Bisons won both. Then he was traded. The Pirates traded him and Luis Salazar to the Padres for Kurt Bevacqua.

It was in August 1982 that Lancellotti got his first call-up, the first of three playing stints he'd see in the majors. He would also play in 17 of his career total of 36 major league games.

In those 17 games, Lancellotti batted just .179 with no home runs. He got his first big-league hit Aug. 29, it was a three-run double.

He wouldn't see the majors again until four seasons and five organizations later, with the Giants. It was with San Francisco that Lancellotti hit his only two major league home runs. He hit his first Sept. 18, a pinch-hit two-run home run, then his last Sept. 23, a pinch-hit three-run blast.

He went from San Francisco to Japan. Playing for the Hiroshima Toyo Carp, Lancellotti returned to hitting home runs. He hit 39 to lead the league.

But Lancellotti was conflicted about his time in Japan. He made some money. But he also got sidetracked from his real goal, making it in the major leagues.

"My whole life has been driven toward the Major Leagues, and when I finally got there, I felt like I sold myself out for a few bucks," Lancellotti wrote in the book Remembering Japanese Baseball: An oral history of the game.

Lancellotti got back to the majors one more time, playing four games for the Red Sox in 1990 and his major league career was done.

He returned in 1995, to play replacement ball for the Marlins. The career minor-leaguer would also use that time to speak out for minor leaguer's benefits. Lancellotti felt that minor leaguers were getting short-shrift, asked by the union not to play, but forgotten about otherwise. Lancellotti wanted an organized pension plan.

"You can go to union meetings until you turn blue and you will never hear anyone say, 'Hey, I wonder what can we do for those struggling minor league players?'" Lancellotti told The South Florida Sun-Sentinel.

Writing in Remembering Japanese Baseball, Lancellotti said that playing, for him, was never about the money. He'd gone to "every God-forsaken place on Earth, all because I just loved playing so much."

"It was kind of a rocky road," Lancellotti wrote. "I didn't choose the highway. I went by the back roads. I played for seventeen years and only got about ninety days in the big leagues. But you learn a lot doing it that way."