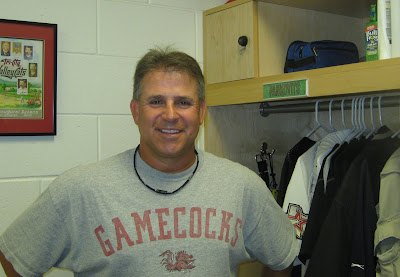 My interview with Jim Pankovits, manager of the Tri-City ValleyCats and member of the 1990 CMC set, will be up Monday evening. The interview went well, touching on his career, from his long wait to get to the majors to his transition to manager and back to managing. 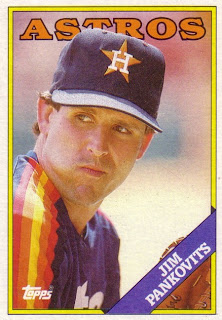 But for now, I figured I'd answer the question that's been burning Night Owl for 21 years: Did Jim Pankovits' 1988 and 1989 Topps cards depict the correct player? (For the answer, jump to the end. For the suspense-filled story about how I got to ask, read on)

Before answering the question, I'll start with how I got to pose it in the first place. I had known about Pankovits managing the ValleyCats in nearby Troy since last year. It was noteworthy to me then because I had seen him manage before, way back in 1995 when he managed the Quad City River Bandits in my home state of Iowa. I even got three cards signed by him.

It was earlier this year, as I worked on this blog, that I realized he had added significance. He was in the very set I was touring. So I knew I'd try and set up an interview with him. It was just a matter of when.

I wanted to pair an interview with a game, like I did last month with my first interviews for the blog, Dann Bilardello and Roger LaFrancois, the manager and hitting coach of the Batavia Muckdogs in Batavia, NY. I interviewed them early in the afternoon and went to the game with my wife that evening. 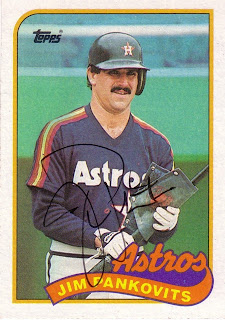 We chose Saturday for our ValleyCats game because it fit with our schedule, and we wanted to go to a game with some friends. So, Saturday it was. I made the preliminary calls to the team, with the proper requests, and got the interview. It was set for 1 p.m.

Going over some stuff in the morning to prepare, I stopped by this blog, then glanced at what others had written in the past few hours. What caught my eye immediately was a post by Night Owl. It was one of his "brush with greatness" posts. This one was about Jim Pankovits.

I spotted this literally three hours before I was going to meet the guy myself. The crux of Night Owl's post was that 21 years ago he met Pankovits while covering the Buffalo Bisons, the Pirates' AAA team. He asked Pankovits what he was supposed to ask.

But the question he really wanted to ask was about baseball cards. Why did the photos on his two most recent Topps cards look so different? Were the photos really of him?

But Night Owl never asked the question. He was too embarrassed to.

It was perfect. I would ask the question for Night Owl. And, in the process, maybe take away some of the two decades of regret that went along with it, or something like that.

All I needed to do was find the cards. It would be a lot easier to ask the question with the cards in-hand. And I had to find them in less than two hours. I knew I had the 1989 Topps card. I also had the 1986 and 1987. I had gotten all three autographed back in the day, when he managed in Iowa.

But I needed the 1988 card. All my other cards were in the attic. I brought them back with me from home a couple years ago and they've been up there since. I went looking for my loose 1988 Topps cards, going into it thinking that, if I had the card, I would have gotten it autographed with the other ones. I was right. It wasn't there.

I did know where to get one. My pristine 1988 Topps cello-wrapped factory set. I got it back when I was a kid. It must have been a Christmas present. And, like any other kid who knew his collection was more than just a collection, it would be worth something some day, I never opened it. Obviously, an unopened and unloved boxed set would be worth way more than an opened and loved one.

Sitting up in my attic, staring at that unopened boxed set, I knew what I had to do. Helping me along was the price tag that was still affixed. "$29.99" it read. (Come to think of it, maybe it wasn't a Christmas present. I'm sure my parents would have at least taken the tag off. Maybe.)

If only my parents, or whoever got it for me, would have waited 22 years. They could have gotten it from ebay today for a third of that.

But, don't worry, I documented its opening. I took pictures before and after. I even had my wife video me opening it. It was almost like Christmas 1988, 22-years later.

Given the mentality with these things, I had never opened one before. I had always assumed they came pre-sorted, 1-792. I could just bust it, find card 487 and go. Turns out, they're not in order. Or, at least, this one wasn't. Thumbing through half the box, I finally found Pankovits.

Cards in hand, I got to the stadium in plenty of time. Brought into Pankovits' office by team media coordinator Chris Chenes, I began my interview. Things went great. Pankovits signed my CMC card. I got through most everything I wanted to get through. Then Chenes returned, time was running short.

Wrapping up, I had one more question. Prefacing it with an I-don't-know-if-you-pay-attention-to-your-cards, I explained that a friend, (and by friend, I hope he didn't think that was me. Because, well, that would be embarrassing, asking a baseball card question and all.) the friend had wondered about these particular cards. I showed them.

Could he confirm that these photos were, in fact, him?

He glanced at the 1988 card and pointed out the glove behind his name. The glove was a catcher's mitt. Pankovits served as the Astros' third catcher one year, he explained. He caught in the bullpen.

The other card, was also him. Chenes, in for the end of the interview, glanced at that one and seemed surprised to see his team's manager with a mustache circa 1988. But Pankovits didn't flinch. Yes, that was him. The mustache, he explained, was an artifact of the previous off-season in winter ball. He played in Venezuela, grew it there and returned with it.

That card was already autographed, from back in the day. But Pankovits kindly asked if I needed the other one signed, as well. I politely declined. He didn't have to. The important one was the CMC card.

The 1988 card was also going back in my boxed set. Though an autograph would be a cool addition to the set, it might be hard to explain later. Because it is, of course, a pristine 1988 Topps factory set, albeit opened, would be worth something. Some day. Maybe. And the fewer questions, the better.

The thought did cross my mind later, maybe Night Owl would have enjoy the autographed card. But that was later. Night Owl will just have to enjoy his long-awaited answer.

Make sure and check out the full interview.
Posted by Steve78 at 9:35 PM