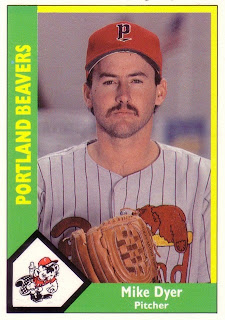 It took Mike Dyer four seasons to make the majors. It took him five to get back.

"I'm very happy with the Pirates," Dyer told The Post-Gazette in 1995. "They've given me an opportunity to pitch. It's a nice town. It's a nice stadium. I'd like to play here.

"It's taken me a long time to get back."

Dyer was taken by the Twins in the fourth round of the 1986 January draft. He made AA Orlando in 1988 and AAA Portland and Minnesota in 1989.

''I was throwing lousy in the bullpen before the game and I just brought it on the field with me,'' Dyer told The Orlando Sentinel. Two of the runs were unearned, but Dyer took the blame himself.
''What happens is what happens, you've got to pitch through it no matter what," he told The Sentinel. "I let them on base.''

"He was nervous, erratic," Kelly told UPI that August. "He's making a lot of progress and working hard."

His neck problems cut short that progress for 1990 and eliminated it for 1991. But Dyer returned for 1992, again with the Twins, but at AAA Portland. Dyer then went through the Indians, then the Cubs' system for 1993, then landed with the Pirates for 1994 and 1995.

Dyer pitched 1996 at AAA Richmond for the Braves, then was reported for a turn in the Atlantic League in 2000 and Dyer was done.

Talking to The Post-Gazette in 1995, the reliever was ready for anything.