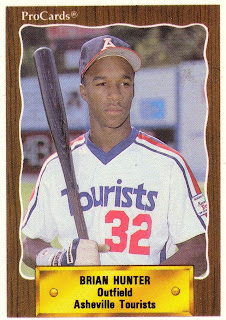 Asked about his successful season in 1997, Brian L. Hunter pointed to his family.

"That's the only way I was taught to play," Hunter told The Ledger. "I'd guess I'd have to put that on my parents. They instilled that in me. They're my biggest role models."

Hunter joined the Tigers for 1997, traded the previous off season by the Astros, the team that took him in the second round of the 1989 draft.

Hunter made AA Jackson in 1993, AAA Tucson and then Houston for six games in 1994. Hunter spent most of that year in the minors hitting .372 and earning the title of best minor league hitter.

''I bring speed to the game, offensively and defensively,'' Hunter told the Orlando Sentinel in April 1995. ''Whether it's hitting and taking an extra base, stealing, scoring runs, or chasing down balls, I build my whole game on speed.''

In 1998, Hunter got the dubious honor of going 0-13 in a single day, a double header July 21 against the Yankees. "He's going to have nights like that," Tigers manager Buddy Bell told The Associated Press. "A lot of players have had nights like that."

Hunter was actually the first ever to have a night like that, The AP pointed out.