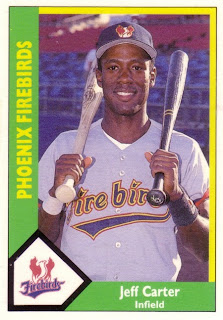 In the middle of his second year managing the Twins' single-A affiliate at the Quad Cities, Jeff Carter told The Minneapolis Star Tribune in 2002 there was nowhere else he'd rather be than in baseball.

"The Twins started talking to me about it two years before I was finished playing," the long-time minor leaguer told The Star Tribune. "I love the game, and where else can you make a living working six or seven months a year?"

In 2002, Carter was in his sixth season coaching or managing in the minors. Before that, he served as a player for 12 more seasons, never making the majors, taken by the Giants in the ninth round of the 1985 draft.

He made AA Shreveport in 1988, AAA Phoenix in 1990. For 1992, he switched to Oakland's organization, playing at AAA Tacoma. Then came spring training 1993 with the Expos. They released him and no one else came calling, according to The Deseret News.

Attempting to accept that, Carter took a job with a Pepsi distribution company near Phoenix.

"I thought it might be time to go back to school so I could get a real job," Carter told The News in 1994. By mid-May, someone did come calling, the Twins' AAA team in Portland was there to give him a break back into baseball.

Carter's playing days ended in 1996, after final stops in the Marlins and Rockies systems. He has coached or managed somewhere every year since, the last three years in the Dodgers organization. This year, he's set to helm the Dodgers high-A team in San Bernardino, the Inland Empire 66ers.

In 2006, while managing the Royals' High Desert Mavericks in the California League playoffs, Carter's team used an opposition error to snag a playoff game win.