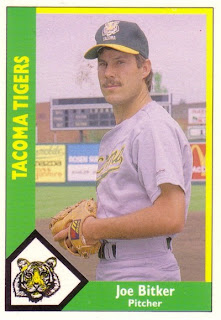 One of the topics President George W. Bush would often joke about was the Texas Rangers trading Sammy Sosa under his watch. Bush OK'd the deal in 1989, sending Sosa to the White Sox in a five-player swap that landed steady hitter Harold Baines in Texas.

Sosa, of course, would go on to the Cubs and do what he did. Baines would spend a year in Texas before being traded again, this time for pitchers Scott Chiamparino and Joe Bitker. Both Chiamparino and Bitker are in the CMC set. They were teammates on the 1990 Tacoma Tigers. While Chiamparino is in the set, it's a card that's not yet in my set. So that leaves Joe Bitker for today.

Bitker was drafted in 1984 by the Padres, staying parts of four seasons with the AAA Las Vegas Stars. He was given his release in June 1989, but picked up weeks later by Oakland, sending him to the AAA Tacoma Tigers.

By July 31, 1990, Bitker was in the big leagues, making his debut as a relief pitcher, holding the Mariners scoreless for three innings and striking out two. It was his only appearance with Oakland. By September, he was sent to Texas, completing the Baines trade. He appeared in five more games for Texas that year, coming back for nine more in 1991, getting his only win. Bitker finished his career 1-0, striking out 24 batters in 26.2 innings. He also had a 4.72 ERA.

In an April 2000, BaseballSavvy.com attempted to correct the future president. It wasn't the Sosa-Baines trade that was his worst, his real mistake as Texas owner was Baines for pitchers Chiamparino and Bitker, who combined for a total of three major league wins.